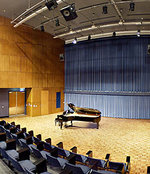 'vanguard' is the second concert in the 2010 ensemble fabrique series which will be an event not to be missed! Conducted by Timothy Tate, with music from established and emerging composers, it features live 5.1 surround-sound electronic improvisations, two new works by emerging Australian composers (Timothy Tate and Annie Hsieh) and an early work by Brisbane based composer Gerard Brophy - it will be a feast for the ears!

ensemble fabrique was formed in early 2009 by Timothy Tate and Braxton Neate. It consists of a wide group of emerging performers with players performing as the repertoire demands. A core group of players perform regularly with the ensemble ranging from undergraduate students to professional players. They represent a diverse group of Brisbane players, both dedicated to the performance of contemporary music, but also of high proficiency on their chosen instrument.

Further information for this event is available online at the event's website or by email to info@ensemblefabrique.com.au