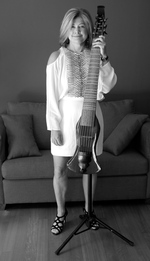 It’s not often that a totally new instrument enters the Sydney improvised music scene but in what is believed to be a local and a national first, Jenny Eriksson is proud to announce the launch of Elysian Fields, an ensemblr featuring the electric viola da gamba.

Eriksson is widely recognised as one of Australia’s leading acoustic viola da gambists – a 7-string, bowed instrument with frets - and one of her instruments great risk-takers. She has collaborated with jazz and world music artists for many years alongside, and as a part of, her highly regarded classical chamber music performances. Taking up the electric viola da gamba is a move she has long contemplated.

“A few years ago a Dutch instrument maker, who is also a gamba player, starting work on an electric viola da gamba. I listened to it on-line and struck up a conversation with him for some months before ordering one. I then had to learn to play it”, Eriksson related. “It’s a very different instrument to my acoustic gamba of course and up to then I’d had very limited experience working with amplification. But I now have a set up I am very happy with, particularly in regard to the sound I make, which is very important to me.” But why the new band? “Baroque music, which is my main area of expertise, has a tradition of improvisation”, says Eriksson, “And I’ve always loved jazz and have many good friends who are jazz and world music artists. I just feel I am at the stage of life that I am ready now to give this a go.”

Her past collaborators include Kevin Hunt, Llew and Mara Kiek and Steve Elphick from the Mara! band, horn player and composer, Paul Cutlan, Matt McMahon, Matt Keegan and her son, Siebe Pogson, who is bassist in the band. In 2014 Jenny even appeared with the Matt Keegan Band at a SIMA gig! “I was somewhat terrified being up there with Matt K’s wonderful band”, Eriksson recalled, “But they were very encouraging and Matt wrote me some great lines. When I got home I needed a large glass of wine to calm my nerves!”

The set list for Elysian Fields has built up over time with new works from Matt McMahon, Siebe Pogson, Eriksson herself and a major new piece by Matt Keegan which will be premiered at the band’s launch on November 25 at Foundry 616. Arrangements of charts by local artists Guy Strazz and Steve Hunter also feature along with a ballad by legendary Swedish jazz/fusion guitarist, Mats Norrefalk, that Eriksson and her son Siebe discovered on a recent trip to Sweden.

Further information for this event is available online at the event's website or by phone on 0412 459 156 or by email to philippogson@theleadingpartnership.com.au