Looking for new compositional approaches and challenging musical conventions through the synthesis of a wide spectrum of contemporary and ancient styles is what inspired my composition. I have been inspired in particular by Béla Bartók and Arnold Schoenberg to develop a personal vision as a composer. 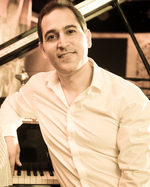 Yedid was born in Jerusalem and since 2008 he calls Australia home. He studied in Jerusalem (Rubin Academy), Boston, MA (New England Conservatory) and Melbourne (Monash University). His expertise as a composer is in the integration of non-European musical elements, including improvisation, with Western practice. His compositions explore new forms of integrating classical Arabic music, Arabic-influenced Jewish music and contemporary Western art music.

Yedid is a Sidney Myer Creative Fellow and Gallop House Composer in Residence. His awards include the top two prizes in Israel for classical performers and composers: the Prime Minister's Prize for Composers (2007) and the Landau Prize for Performing Arts (2009). In 2008 Yedid was awarded a commission composition prize for his solo harp piece at the 17th International Harp contest. Yedid was also awarded a composer-in-residence position at the Judith Wright Centre (Brisbane, 2010) and at the Western Australian Academy of Performing arts (2008).

Inspired by literature, philosophy, art and landscapes, Yedid's compositions form a narrative of pictures, textures and colours. His music incorporates a wide spectrum of contemporary and ancient styles and creates a unique integration between improvisation, Arabic genres and contemporary Western classical music. A confluence between the Maqamat (the Arabic music modal system), heterophonic textures of Arabic genres and compositional approaches of jazz and contemporary Western classical music have been created to produce an original sound.

Yitzhak Yedid, an Israeli-born Australian composer, amalgamates in his music his ancestral Syrian- and Iraqian-Jewish cantillation, Israeli East-West encounters, European and American avant-garde compositional techniques mixed with free jazz ones, and selected Australian influences, all infused with his insights as a concert pianist and improviser to create an experimental, highly expressive yet alluring modern style. Yedid's music is therefore multi-ethnic, multi-cultural, and consequently, transnational. (2019)

Yitzhak Yedid is a significant composer of considerable capacity, whose works often deal with themes of inter and cross culturality. His status as an artist has been recognised by many awards, prizes and commissions, both in Australia, and internationally. (Davis '19)

Thirteen albums of Yedid's music have been released by prestigious international publishers and distributers including Challenge Records International, Sony, Naxos, -btl-, Muse, MCI and Kaleidos, and numerous reviews have been published in the international music media.

Yedid is an adjunct Associate Professor at the Western Australian Academy of Performing Arts (WAAPA).