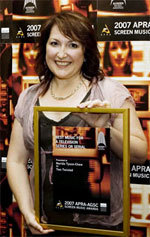 Nerida Tyson-Chew is an award-winning and celebrated Australian film composer, orchestrator and conductor who has written scores for both television and film. Tyson-Chew gained her Bachelor of Music (honours) in composition from the University of Sydney, and she has also completed a Master's Degree (Harry Warren scholarship) in scoring for motion pictures and television at the University of Southern California, Los Angeles.

Her television work includes Two Twisted, which won her the 2007 APRA/AGSC Award for Best Music for a TV Series, Halifax F.P, Evil Never Dies and The Lost.