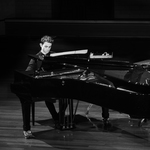 City of Ghosts (2015) was selected by the Melbourne Symphony Orchestra to be performed in the 2016 Metropolis New Music Festival, under the baton of American conductor Robert Spano, who then led the Atlanta Symphony Orchestra in a repeat performance to critical acclaim.

In his work for theatre, Alex creates highly stylised, bespoke sound design that is closely sculpted to the emotional intensity of a production. His work for the Blue Room Theatre's 2018 production of Minus One Sister was described as 'organic and edgy' (Stage Whispers), having 'audience members on the edge of their seat and almost in tears' (Dircksey) and a 'soundtrack you want to go home and download' (Out in Perth), while his work on the 2016 production of TILT was described as 'an eclectic composition of sounds…integral to the excellence of the piece' (Pelican).

Alex holds a degree in Composition and Music Technology with First Class Honours from the Western Australian Academy of Performing Arts and is a current Masters candidate at the Sydney Conservatorium of Music.

"City of Ghosts" is cinematic in its approach, and Turley has deftly painted a coherent, pictoral sound world that is full of suspense... a brilliant piece of music. (Jon Ross, Atlanta Journal-Constitution)