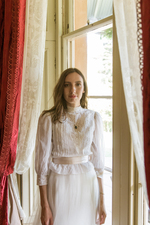 Emerging Australian composer/performer Sarah Elise Thompson produces music that transports you to other worlds. The works on her intricate, intoxicating debut album, self centre, are the sound of a brilliant young artist stretching her wings and discovering her voice.

The seven works on this album demonstrate the full range of Thompson's talent, with pieces written for solo instruments, trios, and small ensemble with voice. Though written for and performed by a diverse range of artists - including Deborah Cheetham AO, PLEXUS, Ensemble Offspring and Dave Elton (Principal Trumpet Sydney Symphony Orchestra and London Symphony Orchestra), emerging talents Will Hansen, Jye Todorov, and US based artists Matthew Stiens and Huizi Zhang - they share a timeless, intangible quality that demonstrates Thompson's maturity beyond her years.

Thompson studied at the Sydney Conservatorium of Music with composer Gerard Brophy, graduating with a Bachelor of Music (Hons).

In addition to her composing, Thompson is a pianist, and performs with SPIRAL - a seven-piece composer/performer collective based in Sydney. She has previously been invited to perform at Extended Play, a 12 hour new music festival at City Recital Hall, Sydney, and in the Backstage Music series.