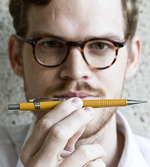 Timothy Tate (AUS/UK) is a composer and violist, currently based in London, UK. His music is often informed by extra-musical concepts such as drama, expressivity and simultaneity, and ranges from concert music to installation and site-specific work, often incorporating the medium of ¼ inch magnetic tape. Timothy has performed as a soloist and chamber musician, co-founding and directing 'ensemble fabrique' (Australia), as well curating concerts and musical projects with a strong focus on the dialogue between music from contemporary to early music disciplines. Current projects include writing a new work for flute, viola and harp for the London Spitalfields Festival, and a new work for piano and electronics for London based pianist Belle Chen.

Timothy has been featured as both a composer and performer on ABC Classic FM, and his music has been featured in festivals such as Fresh Meat (Melbourne), OzAsia Festival (Adelaide), and the New Music Network Mini Series (Brisbane). Recent compositional engagements have included writing for Brisbane-based flautist Janet McKay, the London-based contemporary music ensemble CHROMA, the Blossom St Singers and the Badinerie Players.

In 2012 Timothy received his orchestral debut with fracture, a work that was commissioned and performed by the Queensland Conservatorium of Music Symphony Orchestra as the recipient of the 2010 Harris Peck Composition prize. In the same year he was co-commissioned by the Adelaide Symphony Orchestra and OzAsia festival to write From Thunder's Violence for ensemble and Guqin, receiving tutelage from James Ledger and Tan Dun. In 2011 Timothy was involved in the MODART11 program with the Song Company, writing the work 4 traces, a setting of 4 haikus by Matsuo Basho & Otomo Oemaru. In 2010 he was commissioned by Melbourne based violinist Sarah Curro to write signal trace for semi-acoustic violin.

Timothy is currently undertaking a Master of Music in Composition, with a second study in viola, at the Royal Academy of Music in London, UK, working with Simon Bainbridge (composition) and James Sleigh (viola) with the support from the Brisbane City Council's Lord Mayor's Young and Emerging Artist Fellowship, the Ian Potter Cultural Trust, the Churchie Foundation and the Dr Mosco Carner Scholarship.