My music contains either some, or all of the following elements: indeterminacy, metric modulation, interference, borrowing, theatricality and humour. These aggregate to form something slightly complex, but out of respect for my Grandmother, there is always a melody in there. 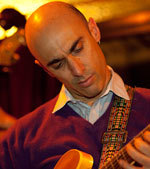 Adam Starr's music often features unusual orchestration and color, resulting from a combination of original samples, the fusion of both digital technologies and acoustic instruments, and a jazz musician's bent for extended techniques.

Melbourne-born Adam Starr (b. 1970) studied film scoring at the Royal College of Music (London), where he received a Master's in 2005. Starr is in the completion stages of a PhD in composition at University of Melbourne, studying with Stuart Greenbaum. He performs as a guitarist with Frock and the Australian Jewish Music Ensemble, and has toured Europe, Asia and the Middle-East with these ensembles and others.

I Want to Tell You a Secret premiered at a Melbourne Composers' League concert in October of 2010, featuring the Silo Quartet. This song is part of a larger work, Jerusalem: The Year That Was, a 50-minute (mostly wordless) song cycle for string quartet, electric guitar, percussion, spoken word, and pre-recorded loops and samples. Starr will record this, the final work of his Folio of Compositions, in July of 2011. Another song from the cycle, Boker Or, will be recorded and performed by Grammy-award winning ensemble Orchestra of Our Time (New York) later in 2011.

In 2009, Starr was artist in residence at Melbourne High School (Arts Victoria), which resulted in a performance of The Taste of Success for massed choir, orchestra and turntablist. The Ballad of Alberto and Elliot was performed by Orchestra Victoria at the Iwaki Auditorium in 2008, when Starr took part in a composer development program (Symphony Services). He took part in recently in the inaugural National Composer's Forum, resulting in a collaboration with the Australian String Quartet. The resulting performance of Agether was performed and recorded in August of 2010. Starr was featured composer in the inaugural Melbourne Guitar Festival of 2009.

Starr has been the recipient of several grants, scholarships of awards. In 2009, he was received a grant from the City of Port Phillip, and an AGL Shaw Summer Fellowship (State Library of Victoria). He is also completing his PhD with the assistance of a Melbourne Research Scholarship. He is currently tutoring at the University of Melbourne, where he has also lectured.