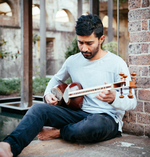 'While improvisation is central to the band's conception, it's the quality of the Sadeghi's​ compositions and the opulence of the ensemble sound as much as any soloing​ that makes the music so enthralling. Despite its bright, metallic sound, the tar has a singular ability to soothe one into a state of quiet rapture, so you emerge from its spell feeling that perhaps you can survive another day, after all.' (John Shand - The Sydney Morning Herald)

Hamed Sadeghi is a world music specialist with Iranian classical music background. He plays tar, setar and oud and performs within a diverse range of musical projects, as well as composing and performing his own original music.

He studied Iranian classical music in Tehran and did a Master's of sound engineering in Malaysia. He began his music career performing Persian traditional music with different ensembles in Iran and then moved to Malaysia to experience fusion music, and toured in Malaysia, Singapore, Philippines and Taiwan to perform Persian traditional music and collaborate with Asian musicians.

He moved to Australia to pursue his career in a Western country, and this led him to collaborate with well-known Australian jazz and classical musicians. He has formed Eishan Ensemble with the purpose of creating new music for present time. Eishan Ensemble have performed in different local and international festivals.

Established the ensemble Mezzo Unique and toured within Asia, October 2011.

Performed in the Adam and Eve project at the Performing Art Centre, Kuala Lumpur, Malaysia, in June 2012.

Established Eishan ensemble and toured within Australia and Asia, January 2016.

Performed at the theatre project Sami In Paradise as a collaboration with composer Jethro Woodward, Belvoir Theatre, Sydney, April 2018.

Toured in the Philippines with Eishan Ensemble and participated in the Plucked Music Festival 2018.

Scored music as a collaboration with Michael Askill for the Illiad Out Loud project at the Sydney Festival 2019.

Harmony - a collaborative album for tar and piano with the Australian composer David Hush.