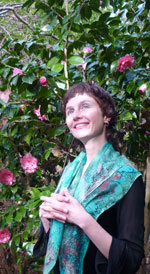 Jacqui Rutten was born in Melbourne in 1964. She comes from a musical family, and her mother is an accomplished pianist, cellist and sound healer. Her brother Matthew Rutten is a silk artist. Throughout her school years Jacqui pursued her interest in singing and composing, also playing the piano, violin, and guitar. She was busking in three-part harmony on the streets of Melbourne with her guitar at 14 years of age.

Jacqui gained a Bachelor of Arts from the University of Melbourne, and received a BP Award for her undergraduate and post-graduate diploma at the Opera Studio, of the Victorian College of the Arts (1991). She also studied singing and gamelan for one year at Sekolah Tinggi Seni Indonesia (1991-1992), assisted by the Australia Council for the Arts and an Indonesian government dharmasiswa (bursary).

Jacqui Rutten's compositional work has always been inextricably linked to her singing. She was a soloist for the Victoria State Opera Youth Company (1987), improvised for a full house at the Sydney Entertainment Centre (1989), and live-to-air for the Australian Broadcasting Commission (ABC, 1991 and 1992), and also sang for traditional and contemporary performances in Central Java with Indonesian artists (1991-2). Jacqui was a regular cantor at St. Patrick's Cathedral, Melbourne (1999-2005), and has premiered works by Australian composers including Wendy Morrisey, Andrée Greenwell, David Chesworth, Sir Jonathan Mills, Warren Burt, and Dindy Vaughan. Jacqui also sang for the Wurundjeri.

Jacqui's vocal compositions have been commissioned by ABC Radio, Chamber Made Opera, and festivals, including the Asia Pacific Festival. In 1994 she was commissioned by Chamber Made Opera to compose a dance-opera Tresno (Love, Opus 1) for the Sydney Festival. Described by The Age newspaper as 'state of the art', Tresno was remounted for the Greenmill Dance Festival and broadcast on the Australian Broadcasting Commission. Jacqui was also commissioned by the Australian Broadcasting Commission to create radiophonic works, including Shelter (2003) and Lyrebird Themes (2005). Her compositions are held in libraries.

Jacqui Rutten registered Sacred Stage in 2007, and now creates concerts - from sacred song to Improvisations as Nature - for churches, cathedrals, festivals, universities, and galleries. She organises concerts for charity, particularly for women and children experiencing homelesness. Jacqui received a Shire of Yarra Ranges grant for this work in 2017. She has also focused on Irish song, and was a conference delegate at the 2014 international conference Composition in the 21st Century at Trinity College, Dublin, Ireland, speaking about vocal composition and improvisation.

Jacqui Rutten composes with pen and paper, to be part of nature, infouenced by birdsong and insects. She sings and dances Improvisations as Nature as a daily practice, an annual event, and for performance. This vocal improvisation was released in 2017 on the Melbourne Composers League 20th Anniversary CD with flautist Livia Judge.

Jacqui has also been Artist in Residence at Montsalvat in 2017, and a Composer in Residence at the Tyrone Guthrie Centre, Ireland. Her first residency in Ireland was thanks to a Phonographic Performance Company of Australia grant in 2015.

In 2019, Jacqui researched Song as a Sacred Pathway into Nature in County Armagh (Ard Macha) Northern Ireland and returned to the Tyrone Guthrie Centre as a Composer in Residence, supported by the Australian Cultural Fund. This voyage culminated in concerts at St. Paul's Cathedral Melbourne, and the Lunchtime on Flinders series, Adelaide, also recorded for Radio Adelaide.

During the pandemic Jacqui composed new works, moved away from technology - no zoom performances, and instead delved into new arts forms. In 2021 Jacqui Rutten received funding from the Shire of Yarra Ranges to present four Recession Charity Concerts with the theme of Song as a Sacred Pathway into Nature.