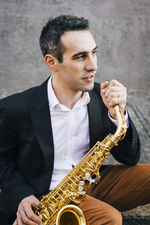 Nick Russoniello has been the recipient of a number of major awards including the ABC Symphony Australia Young Performer of the Year and the Fine Music Kruger Scholarship. Nick has appeared as a soloist with the Adelaide, Queensland, Melbourne and Sydney Symphony Orchestras and as a guest performer with the Acacia Quartet, Omega Ensemble, Australian Opera Ballet Orchestra and the Australian World Orchestra. Nick's compositions have been performed around the globe and his performances can be regularly heard on ABC Classic FM and Fine Music 102.5. Nick is a Yamaha Australia artist.