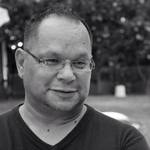 Troy's journey with music began at 11, when a neighbour offered to teach him the fundamentals of music, and Troy flourished. He found an old photograph of his father playing a banjo and learned that his family from Taree was a musical family - a great revelation that has been inspiring him for the last 40 years.

After an injury whilst working for Telecom, Troy found himself attending a TAFE college called Eora, where he also made a good friend in Christopher Sainsbury who taught Troy more about music than anyone. Troy has written some good pieces which have impressed a few people and hopes to write more.