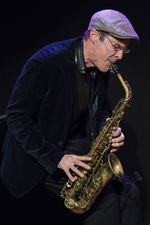 Saxophonist, composer, researcher and educator Andrew Robson is one of Australia's premier jazz musicians. A two-time ARIA award winner and a recipient of the Freedman Jazz Fellowship, Andrew performs nationally and internationally with groups including the Paul Grabowsky Sextet (winner of the 2014 ARIA award), Mike Nock's Big Small Band, Ten Part Invention, the World According to James, and his own groups.

Andrew has toured widely with numerous ensembles and has performed at many of the world's major jazz, world and folk music festivals including Chicago, Berlin, London and other major festivals and venues throughout Europe, Asia, Canada and the United States.

Andrew has released a series of critically acclaimed albums as a leader, including Bering the Bell (2008), Songbook (2013), and, most recently, The Child Ballads (2016).

Andrew grew up in Canberra and, prior to his move to Sydney in 1992, he travelled to New York where he studied with some of the world's most celebrated saxophonists, including David Liebman and Steve Coleman.

From 1993 to 1997, Robson featured as a member of the Grandmasters, a groove band led by the legendary Jackie Orszaczky. With Jackie, he twice toured Europe performing at concerts and festivals in Hungary, Austria, Germany and Holland. Andrew Robson's playing can be heard on three of Jackie's CD releases: Family Lore, 100%, and Deep Down and Out.

In 1997 Robson joined the internationally acclaimed folk/world music group MARA with whom he has performed extensively throughout the UK, Europe, Asia and Canada.

In addition to his reputation as one of Australia's leading jazz soloists and composers, Andrew's broad performance experience sees him equally at home in folk, world and popular music contexts. During a career spanning more that 25 years Andrew has performed with some of Australia's most well-known and celebrated talent including Marcia Hines, Tim Finn, You Am I, Renee Geyer, Jon Stevens, Josh Pyke, Vince Jones Ed, Kuepper, Alex Lloyd, Briggs and The Whitlams. He has also appeared with touring American artists Terry Evans, Cornell Dupree (Aretha Franklin) and Jon 'King' Cleary.

In 2016 Andrew received his PhD from the University of Sydney. His thesis focuses on his own creative work as viewed through the prism of the Australian and New Zealand regional jazz scenes. Since 2017 Andrew has lectured in music at Macquarie University in Sydney.