Growing up in the heyday of the 50s and 60s I became interested in Jazz and became the first ever guitarist with a Jazz degree in Switzerland in 1977. My main interest is Crossover/Confluent Music, in particular combining Jazz Improvisation with (classical) orchestral soundscapes. 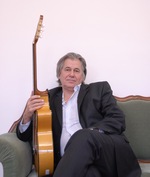