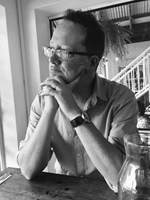 Rohan Phillips is a composer currently residing in Bendigo, Victoria. He was born in Maryborough (Victoria) in 1971 and grew up in a musical family, playing trumpet with the Bendigo Symphony Orchestra, and singing in the choir of St Paul's Cathedral (Bendigo).

Early efforts in composition were encouraged by his cousin, Helen Gifford, who continues to be an influence and mentor. In 1988 Phillips commenced composition studies at the Canberra School of Music and graduated with a Master of Music (Composition) in 1997.

Philips's compositions include works for solo, chamber, vocal and orchestra ensembles. His work Poem/Eleven hours... was performed in Hobart as part of the Australian Composers' Orchestral Forum. In April 2005 Phillips directed the first performance of his most significant work to date, Seven Fragments after Paul Celan, for chamber ensemble with voices.

As a conductor Rohan has worked with a variety of ensembles including the Bendigo Chorale (1998-2008) and the Bendigo Symphony Orchestra (2008-2018). Rohan is currently musical director of the choir of St Paul's Cathedral, Bendigo, a position he's held since 2007. He works as Arts Officer with the City of Greater Bendigo.