Pham thinks of her work as interdisciplinary, her music often straddling art and scientific research in order to tell stories. 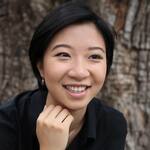 Victoria Pham is an Australian composer, archaeologist, writer and artist based between Sydney and London. She holds a Bachelor of Music Studies (Composition) from the Sydney Conservatorium of Music and Bachelor of Arts (Archaeology/Art History) (Honours) from the University of Sydney. She is currently a recipient of the 2020 Cambridge International Scholarship while pursuing her PhD in Biological Anthropology at Cambridge University.

Pham has been commissioned by a number of institutions such as the Art Gallery of New South Wales, ArtsHouse Melbourne, Campbelltown Arts Centre, the Brett Whiteley Studio, and Maitland Regional Art Gallery, and worked with a number of ensembles such as Gondwana Choirs, Melbourne Symphony Orchestra and Josie and the Emeralds. As an artist, she has featured in several festivals from VIVID to Tilde to TINA and BLEED, as well as co-producing a series of installations for the 2019 Newcastle Writers' Festival with publishing house, Spineless Wonders. She is the recipient of several artistic and academic accolades from being a finalist for the NSW Young Academic Achiever of the year, the Henry Lawson Prize for Prose to the Maureen Byrne Prize for Historical and Prehistoric Archaeology.

As an archaeologist, Pham has worked with the Australian Museum and the Max Planck Institute for the Science of Human History as a researcher, photographer and illustrator. She has fieldwork experience in Australia, Northern Mongolia and Sri Lanka and has just embarked on her first solo fieldwork project in Moià, Catalonia at the Paleolithic site of Coves del Toll as an Olwen Tudor Jones Scholar. Her specialisation is in prehistoric archaeo-acoustics.

Pham is currently the Artistic Director of FABLE (London) and the co-Artistic Director and co-Founder of experimental music art-sound collective Sonant Bodies (Australia) with composer James Hazel. She is the host and producer for classical music podcast, DECLASSIFY.