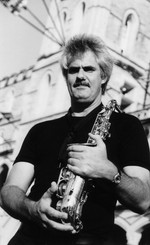 Born in Nelson New Zealand in 1953, Richard attended the Canterbury University and the Sydney Conservatorium of Music, studying further in the US with Victor Morosco (saxes, clarinet and woodwinds) and Abbe Fraser (counterpoint/composition).

Over the last 30 years, Richard has worked as a professional woodwind doubler (saxophones , clarinets, bass clarinet and flutes) in a wide range of musical situations ranging from orchestras, recording studios, television, theatre and bands in a variety of musical styles including classical ensembles through to jazz, afro cuban and rock and roll.

He has worked and toured with artists such as Howard Keel, Barbara Cook, Natalie Cole, Grace Knight, Sarah Brightman, Michael Crawford, Olivia Newton-John, Cleo Lane and many others. He has also had the pleasure of working in bands lead by Maria Schneider and Bob Florence.

Having worked extensively in the theatre, he has performed over forty shows including Cats, Nine, Chess, West Side Story, Chicago, Ain't Misbehavin', Gertrude Stein and Companion, Joseph, Anything goes, Guys and Dolls, 42nd Street, A Little Night Music, Hot Shoe Shuffle, Piaf, Sweet Charity, The Boy from Oz, Singin' in the Rain, The Producers and far too many others.

Richard has worked as a teacher, clinician and lecturer in music for more than thirty years and hopes to do so for another thirty or so. He has also worked widely as a composer and arranger.

A creator of the highly successful 'Teacher On Tap' Woodwind Integrated Learning Series for Saxophones, Clarinet and Flute, he continues to write and arrange for ensembles as diverse as chamber orchestras, big bands, Latin ensembles and chamber groups, specialising in music for wind instruments.

He is a member of the AMC and APRA and has music published in both Australia and the US.

Biography provided by the composer — current to September 2005