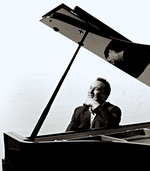 Composer/pianist David Paterson began playing the violin at the age of 4, the piano at 7 and within five years had completed the initial eight grades of the A.M.E.B. piano scheme. His compositional quest began at the age of 7 with a series of short Bagatelles for solo piano. Soon after these first works were completed, the tutelage of Trevor Pierce was to guide and encourage a formidable body of work consisting of over a hundred solo violin caprices after Paganini (One of which was awarded a 'highly commended' in the 1996 'Sydney Morning Herald Young Composer Awards'), several sets of short piano pieces, a number of pieces for various chamber ensembles, movements for a Piano Concerto, Violin and Viola Concerto and two Violin Concertos to name but a few.

The proliferation of David's enthusiasm for the art form was to take a more focused approach at the age of 12 when he was placed under the mentorship of Richard Gill. For the following 3 years, David's compositional output consisted mainly of compositional exercises based on harmony (Riemenschneider) and counterpoint (Fux), which laid the basis for a number of works in the style of the past masters, most notably J.S.Bach. It is during this time that David entered Newington College as a music scholar where he was awarded the annual prize for composition for 5 consecutive years. After transferring to the Royal College of Music (London) from the Sydney Conservatorium in 2004, David interacted with composers Jonathan Cole, Kenneth Hesketh, Louis Andriessen and Mark-Anthony Turnage during a focussed development of his own musical language. In addition to his activities at the RCM, David was invited to study with Rolf Martinsson as a guest of the Malmö Academy of Music (Sweden) for a short period in 2006.