I am not interested in fashion; I write for performers and audiences; the stuff of music is the building and release of tension. Given my theatre work and my love of the human voice, I have inevitably gravitated towards opera. 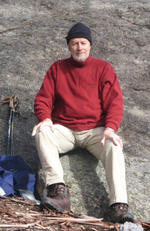 Ralph Middenway was born in Sydney on 9th September 1932. Through studies in music, anthropology and linguistics at Sydney University, he began to develop his ideas about music in our own and other cultures. Peter Platt's and Donald Peart's conducting greatly influenced him; he also sang in choirs, notably with Vincent Shepherd and Norman Johnstone, and appeared as a conductor.

Writing music, teaching music and drama, singing, conducting and writing words kept him increasingly busy, and, instead of completing a degree, he soon found himself working in various roles from teacher to theatre manager, stage director, production manager and theatre consultant. He moved to Adelaide where, for twelve years, he worked at Adelaide University Union, ending up as its CEO, followed by a period managing the Parks Community Centre.

In 1983 he started working as a full-time freelance composer. His work was championed by conductor Patrick Thomas, and performed by the ABC Adelaide Singers, Adelaide Symphony Orchestra and West Australian Symphony Orchestra. Other notable performers of his music include Elizabeth Campbell, Australian String Quartet, Australian Brass Quintet, Robert Dawe, Sally Mays, the Australian Youth Orchestra and Michael Kieran Harvey. In addition to Australia, his music has also been performed in Europe, North America and Japan.

Given his theatre work and his love of the human voice, Ralph Middenway inevitably gravitated towards opera. His three operas are The Letters of Amalie Dietrich, a one-act four-hander commissioned by the State Opera of South Australia; Barossa, a Singspiel commissioned by Brian Chatterton for Australia's Bicentennial; and The Tempest, with 15 singers, 6 dancers and 2 actors. The Enchanted Island (from The Tempest) was funded by the Mara Dole Foundation.

For twenty years Middenway was a critic and feature writer for publications including The Australian and The Advertiser newspapers. He went on working as a writer and editor, and in 2001 he co-edited a book of essays on Parsifal for the South Australian Wagner Society.

In 2008 he and his wife sold their native flower farm near Adelaide and moved to Hobart, where his music is being archived in the Tasmanian Conservatorium Library.

A major project undertaken in Tasmania was a new full performing edition of the Play of Daniel, to be sung in Latin. One version was specific to St David's Cathedral, Hobart; the second adaptable as to venue, scale and instrumental preference. The third, completed in collaboration with translator Professor Emerita Rosemary Lloyd, was for Francophones.

Another recent, large project was a cantata about St Francis of Assisi, The Sun of Umbria (2013), using poetry by Hobart poet and educator Clive Sansom.

In August 2015 Middenway graduated with a PhD from the University of Tasmania, with a folio of compositions and an exegesis focussed on setting words to music.