Ruth McCall says: “I want people to feel good when they listen to my music. I don’t want them to frown and turn to the person next to them and whisper, “Is that the end? Do we clap now?!” 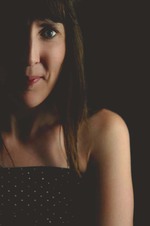 Ruth McCall was born in Adelaide, where she graduated with Honours from the Elder Conservatorium of Music at the University of Adelaide. She also gained an Associate Diploma in piano performance. In 1996 she joined The Song Company as first soprano and remained there for fourteen years. In that role she toured extensively overseas, including Europe, China, the USA, England, and Asia. Her performing opportunities included Australian and overseas early and contemporary music festivals, numerous recordings, as well as performing hundreds of concerts for primary school children in association with the Musica Viva in Schools program.

It was during her time with The Song Company that McCall became interested in writing for voices, as 6-part original arrangements for small ensembles were hard to find. Former Artistic Director of The Song Company, Roland Peelman, was instrumental in helping her to workshop and develop these skills, as well as providing opportunities in concert programs for continued exposure. McCall finds pleasure in reinventing a well-known tune, and presenting it in a different way, especially with folksongs and Christmas carols. Her most popular folksong rewrite is her version of Waltzing Matilda, which has been performed by many adult and youth choirs.

From arranging, McCall branched into original compositions, being composer-in-residence for the Sydney Children's Choir in 2011, and establishing her own business selling choral compositions online (www.ruthmccall.com). In 2016 she was commissioned by The Song Company to write The Duck for their Michael Leunig Almanac series. Other commissions have come from MLC Burwood, PLC Pymble, and The Arts Unit Lewisham. McCall maintains a strong connection to the world of children's music, being a conductor with the Sydney Children's Choir as well as teaching voice and piano in schools and running teacher-training workshops. She has written many songs for children and for educational purposes. The University of Newcastle Chamber Choir, Echology, is in the process of recording her choral works for CD release.