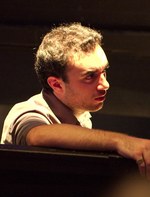 Daniel Masmanian was born in England to Armenian/Greek parents in 1980. He studied piano and violin in Surrey, UK, before studying composition, conducting and piano at the Royal Northern College of Music and gaining his doctorate in composition and conducting from the University of Western Australia.

Daniel worked as a repetiteur at the West Australian Academy of Performing Arts and began work in 2006 for West Australian Opera where he was the Director of Music for the Regional Touring/ Opera in Education programme. In 2008 he was an Artist in Residence at Lasalle College Singapore, and was Maestro Will Humburg's assistant for Deutsche National Theater's 2009 production of Turandot and Theater Bonn's 2010 production of Katá Kabanová.

Daniel's symphonic work Shinglebend was performed by the Tasmanian Symphony Orchestra as part of the 2007 Australian Composers School. For the ACS in September 2010 the TSO recorded Scurrilous Words, a new symphonic work from his doctoral portfolio. As his début into theatre music, his score for R&J won national acclaim. In 2011 Daniel was invited to attend the National Composers' Forum run by the Australian String Quartet, who performed and recorded his new string quartet Bad Angel Fire.

In 2012 he was selected as a member of the West Australian Symphony Orchestra's Composition Project. In 2011 Daniel founded the performing ensemble OperaBox to bring the vitality and beauty of opera to new audiences whilst providing professional opportunities, experience and training to developing artists and crew, conducting Così fan tutte and house and touring productions of La Bohème in 2012. In November Daniel attended the Lisa Gasteen National Opera School as a repetiteur under a full scholarship, then moved to Berlin in 2013 where he wrote his second chamber opera Des Teufels Nacht (on a libretto by Silke Wenzel) and was invited to the 2014 Järvi Winter Academy/ Leonid Grin masterclass assisted by a generous sponsorship.

From 2014-16 Daniel worked for TUI Cruises GmbH as a music director upon their flagship liner MV Mein Schiff 1 and then as a performance coach at the company headquarters in Berlin. After returning to Australia, Daniel was offered the positions of Organist (2016) and then Director of Music (2017) at the Church of St. John the Evangelist in Fremantle, Western Australia and accepted the position of Head of Strings at St Hilda's Anglican School of Girls in 2019.