Catherine's music is known for its programmatic nature, raw emotions, intricate rhythms and driving energy. Her works have been hailed as highly complex yet immediately engaging. 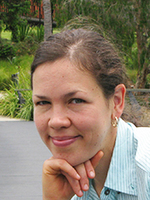 Catherine's pieces have been played at many international events, including four International Horn Symposiums and two World Saxophone Congresses. In recent years, she was the winner of the International Horn Society Composition Contest (virtuoso division) and the recipient of several awards and two grants from the Australia Council for the Arts. In 2017, she was selected as one of four Australian composers for the highly competitive Melbourne Symphony Orchestra's Cybec 21st Century Australian Composers Program. Her music can be heard on Cala, Albany and Equilibrium Records.

Catherine enjoys performing as a pianist, often playing her own music. She was the soloist on the premiere of Out Loud, her piano concerto commissioned by the Cornell University Wind Ensemble, and the pianist on Adam Unsworth's CD Snapshots. On a recent joint tour with Adam Unsworth, Catherine gave recitals at Eastman School of Music, Northwestern University, University of Michigan and Temple University.

Catherine's most representative works are Out of the Woods? (2011), toccata for horn trio, and Scraps from a Madman's Diary (2016), secular oratorio-drama for chamber SATB choir and wind band.