Lancini composes and creates from a space where languorous intuition, harmonic playfulness, and melodic lyricism can be felt in equal measure. Through her creative output she seeks to track and symbolise the felt sense and rhythms of human experiencing. 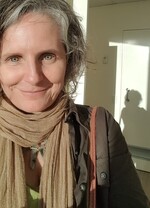 Decades on from her earliest musical memory of improvising and recording one-woman space operas on piano, vocals and descant recorder in her Lismore childhood lounge room, Lancini (formerly Pratten) is still attending to inter-subjective space and music in a panoply of contexts in and far transposed from her Brisbane home base.

A composer and performer in the independent arts scene in Brisbane through the 1990s, Lancini was a foundational member of Music for Heart and Mind - a new music collective out of which the quintet Topology eventually formed. Her defining outcomes from this time were redolent jellyjubes of musicfruit - a recording of her selected compositions; and, FROG LOGIC - an opera for younger audiences created in collaboration with librettist Valerie Foley and workshopped and publicly presented by Victoria State Opera and Melbourne Theatre Company.

In the early 2000s Lancini was commissioned by Topology to compose the four movement work CENTAUR. Each movement as intricately polished as the gemstone after which it is named, the opening movement Obsidian is regularly broadcast on ABC Classic Breakfast and Classic Drive.

A deep encounter with the philosophy and practices that flow from the work of philosopher Eugene Gendlin is a source of generative transformation for Lancini's creative practice, resculpting her as a transdisciplinary artist and facilitator of experiential music and movement-based ritual. A certified Wholebody Focusing Professional and Certifying Coordinator-in-Training with The International Focusing Institute, Lancini is currently collaborating with Australian playwright Donna Abela on the articulation of Focusing-oriented creative practice.

Lancini is a frequent collaborator with singer-researcher-composer-educator Dr Charulatha Mani and soprano-composer-actor Majella O'Shea. She performs regularly for The Stairwell Project [Musicians in hospitals, re-imagining clinical spaces and clinical practice] and also for the Piano Mill as part of the Harrigans Lane Collective. Her composition megaMammal (a songform mashup for whip-bearing cowherds, vocalists and the sixteen reclaimed pianos of the towering building that is the Piano Mill) was premiered on Easter Sunday 2018.

Lancini holds a Graduate Diploma in Education (Primary Music) from Queensland University of Technology, a Bachelor of Arts (Music, English) from The University of Queensland, and an Associate Diploma of Performance (Piano) from the Australian Music Examinations Board.