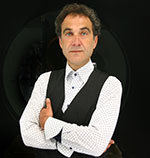 Constantine Koukias was the Artistic Director and CEO of IHOS Music Theatre & Opera for 23 years in Australia.

Constantine's avant-garde approach to the presentation of opera has resulted in hybrid productions such as Days and Nights with Christ, To Traverse Water, MIKROVION (Small Life - 36 Images in a Phantom Flux of Life), The Divine Kiss, and Tesla - Lightning in His Hand. His most recent large-scale work, The Barbarians, was inspired by Constantine Cavafy's famous poem "Waiting for the Barbarians" and commissioned by the Museum of Old and New Art.

His works range from large-scale music-theatre and opera to mobile installation-art events. His compositions have earned acclaim as being remarkable for their mesmerising, atmospheric qualities created by accompanying temporal and spatial production designs. In his recent works, exotic flavours have been introduced through Eastern timbres and melody-design.

In 2004, he was awarded a Sir Winston Churchill Fellowship. His Incantation II for soprano and digital delay won the International Valentino Bucchi Vocal Prize in Rome in 1997. His design credits include the internationally acclaimed Odyssey and Medea.

In 2017-2020 Koukias is preparing two major new works, The Boy Who Fell Out of The Sky - concerto for Ondes Martenot, and Shaped by Trees - a film opera with librettist by Biasino Pezzimenti.