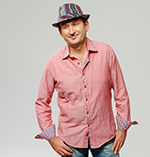 Paul Kopetz completed studies in clarinet/bass clarinet and composition at the University of Melbourne (Bachelor of Music), the Victorian College of the Arts (Postgraduate Diploma in Music Performance) and the Rotterdam Conservatorium, gaining his Uitvoerend Musicus with honours. Over the years he has worked as a freelance clarinettist, saxophonist, bass clarinettist, composer, arranger, conductor, educator, and music administrator.

As an instrumentalist his engagements have included casual bass clarinet and clarinet with the Melbourne Symphony Orchestra, the Tasmanian Symphony Orchestra, the Queensland Symphony Orchestra, Camerata of St John's as well as recording sessions for radio and film such as Babe, In a Savage Land, My Brother Jack and Tempted. Kopetz has recorded for IMAX and the Naxos label. He has worked in music theatre where he considers playing the solo clarinet part in Topol's Fiddler On The Roof as one of the highlights. A passionate chamber musician, he is the founding member of Brisbane-based Artico Ensemble whose mission is to perform great chamber music in non-mainstream suburban venues.

Paul Kopetz has been active as a composer since 2009. During this time his music has been awarded various prizes in composition competitions all over the world. His works and arrangements have been performed at festivals and in concerts by acclaimed Australian and international artists in countries including USA, Hong Kong, Japan, Netherlands, Singapore, Italy, China, Ukraine and Poland. His output includes music for chamber ensembles of various sizes and instrumentation, strings, choirs, concert band and voice. One reviewer has described Paul's music as 'an eclectic and emotive mix of poly-stylistic music where carefully selected pop music idioms add currency to contemporary classical music forms, all steeped in the good old tradition of fine craftsmanship'.

In 2010 the Silesian Philharmonic Orchestra premiered his Valse Triste at the International Festival of Film Music in Łódź, Poland. In 2011 his wind quintet Viracocha received 2nd prize at an international competition in Italy and another wind quintet Armadillo was premiered at the Tyalgum Festival of Classical Music. In 2012 his An Australian Backyard Suite won 2nd prize at the Franz Schubert Composition Competition in Vienna, Austria. The following year the same work was selected for performance in USA. Still in 2013, Paul Kopetz's Mythical Creatures for voices, wind quintet and piano was premiered at the Tyalgum Festival of Classical Music and the following year received awards in USA.

In 2014 his Bunyip for solo bass clarinet was given its world premiere by Dutch bass clarinettist Henri Bok at an international festival in Beijing, China. In 2015 his works for choir, string ensembles, and wind ensembles were selected for performance at festivals in Singapore, Ukraine, USA and the Netherlands. In 2016 Paul Kopetz's Adagio For The Fallen, composed in response to the tragedy of the Paris bombings, received its world premiere by the Lviv Philharmonic Orchestra. Also in 2016 the world premiere of his Night On Karragarra, as performed by Camerata of St John's, received critical acclaim while his chamber music made its debut in New York.

Paul Kopetz enjoys a close association with Musica Viva Australia as one of the composers-in-the-classroom and through the school show Tree Tales, which is based on his An Australian Backyard Suite.

Kopetz is a keen sports fan with speedway, soccer, AFL and cricket as his favourites. He relaxes by going fishing, travelling, solving crossword puzzles in his native language Polish, and engaging with nature.