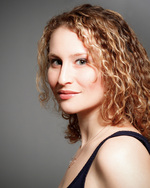 Anna K. Jacobs is a New York-based composer and writer, hailing from Sydney. Her musical theatre works include POP! (written with Maggie-Kate Coleman), which won three Connecticut Critics Circle Awards including Outstanding Production of a Musical, and Stella and the Moon Man, (written with Richard Tulloch and Adrian Kelly), which won a Helpmann Award for Best Presentation for Children.

Current projects include a musical adaptation of the cult horror film, Teeth, and Harmony, Kansas, which tells the story of a gay men's a cappella group in rural Kansas, and is slated for a US West Coast premiere in early 2012. Her Ave Maria for SATB double choir won the 2006 US National Lutheran Choir Composition Contest. It was subsequently published by MorningStar Music Publishers and included on the album Eternity (National Lutheran Choir, Catapult, 2006), and has been broadcast nationwide.

Jacobs's shows have been developed and produced by Yale Repertory Theatre and the Yale Institute for Music Theatre, Pittsburgh City Theatre, the Studio Theatre, Singing On Stage Productions, the Sydney Theatre Company and Theatre of Image, the Penn State New Musical Theatre Festival, and NYU (SCAN). Her music and lyrics have been featured at Lincoln Center, Joe's Pub, Ars Nova, Cutting-Edge Composers, NAMT, the Darlinghurst Theatre, and many others. She is a 2010-11 Dramatists Guild Fellow, a recipient of Dame Joan Sutherland Fund and Anna Sosenko Assist Trust grants, and has been an artist in residence at New Dramatists, CAP21, Goodspeed Musicals, Bundanon Trust, and Hotchkiss Summer Portals, where she also teaches annual workshops in musical theater songwriting and performance.

Anna K Jacobs is an on-staff artist at the Metropolitan Opera Guild. She received her M.F.A. from NYU's Graduate Musical Theatre Writing Program, her B.M. (Honors I) from the University of Sydney, and also studied composition at the Indiana University Jacobs School of Music. She is a member of ASCAP and the Dramatists Guild of America, and is represented by Jack Tantleff at Paradigm Talent Agency.