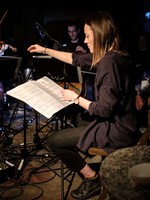 Lisa Illean is a composer of acoustic and acousmatic music, based in London. Her music has been described as "exquisitely quiet shadows shaded with microtunings" (The Sydney Morning Herald) and "a compelling exercise in stillness and quietude" (The Australian). Works span pieces written for orchestra to those commissioned for new, prepared or adapted instruments, and sound works conceived for unique spaces.

Her ensemble works have been performed internationally, across Europe, North America, Asia and Australia, in venues ranging from Royal Festival Hall to Carriageworks' industrial bays in Sydney. Recent commissions include a set of intimate pieces for soprano Juliet Fraser and pre-recorded sound titled A through-grown earth, and Cantor, which was awarded Instrumental Work of the Year at the 2018 Australian Art Music Awards.

"[Illean] shows an extraordinary sensitivity to colour and timbre and creates an absorbing sound-world which lingers after listening."(Art Music Awards)

" the work's sensitive connection to visual art is expressed in music of seductive and evocative beauty." (Operachaser)

"Illean's is a distinctive and original new voice in the landscape and her work was realised here by the SSO with tender care." (The Sydney Morning Herald)

- Video: Cantor, by Lisa Ilean, after texts by Willa Cather