Hyde said of her music: I feel my music can be a refuge for what beauty and peace can still be omnipresent...the triumph of good over evil. I make no apologies for writing from the heart 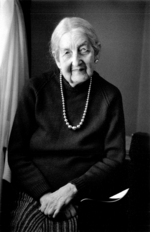 Miriam Hyde was born in 1913 in Adelaide, studied first with her mother and then with William Silver at the Elder Conservatorium. After the University's diploma (AMUA) and winning the South Australian prize for the LAB in 1928, she graduated as Mus.Bac. in 1931 and won the Elder Scholarship to the Royal College of Music, London. During three years there, her professors were Howard Hadley and Arthur Benjamin (piano), R.O. Morris and Gordon Jacob (composition). She won three composition prizes and was soloist in her two piano concerti with the major London orchestras, including the BBC. She also made broadcasts, on what was then called "short wave", to countries of the existing Empire, including Australia. In 1935 she added to her diplomas the ARCM and LRAM.

Returning to Adelaide in South Australia's centenary year, 1936, Hyde wrote much of the orchestral music for the pageant Heritage, produced in the Tivoli Theatre. Of this music her Fantasia on Waltzing Matilda, an overture to one of the scenes, has become well-known as an independent piece in her various arrangements of it. Also in that year her Adelaide Overture was first performed and conducted by (then Dr) Malcolm Sargent.

Seeking the wider scope of Sydney, she taught for several years at Kambala School and lived in Sydney for most of the remainder of her life, active as composer, recitalist, teacher, examiner, lecturer and writer of numerous articles for music journals. For a period during the War, however, when her husband, Marcus Edwards, was a POW in Germany, she returned to Adelaide and taught piano and musical perception at the Conservatorium. It was during that stressful time that she wrote her dramatic Piano Sonata in g minor.

Hyde's works include many for piano, from Preliminary to Diploma standards, more than fifty songs (several of which, set to her own poems, have won prizes, e.g. Elfin Fantasy, Winter Willow Music, Sunrise by the Sea), chamber music, sonatas for viola, clarinet and flute, four overtures and other orchestral works. Her Happy Occasion Overture was performed in the inaugural concert of the Australian Youth Orchestra, at the Sydney Town Hall in 1957.

She performed concerti with all the major Australian orchestras (except Brisbane), and with conductors of eminence, including Sir Malcolm Sargent, Constant Lambert, Georg Schneevoigt, Sir Bernard Heinze, Dr Edgar Bainton, Joseph Post, and Geoffrey Simon, with whom, in 1975, she recorded her two concerti with the ABC's West Australian Symphony Orchestra.

Miriam Hyde was Patron of the Music Teachers' Associations of NSW and SA, also of the Blue Mountains Eisteddfod and the Australian Musicians' Academy, and Honorary Life Member of the Fellowship of Australian Composers, the Victorian Music Teachers' Association, and the Strathfield Symphony Orchestra, with whom, in April 1996, she played the solo part of her Fantasy Romantic for the first time since 1963, when she had performed it during an Australasian Composers' Seminar in Hobart.

Her literary indefatigability (which has yielded nearly 500 poems) culminated in 1991 when Sydney's Currency Press published her autobiography, Complete Accord. The royalties from this publication are to go to the scholarship that she won in 1931, the value of which, needless to say, has been reduced by years of inflation.

During the 1990s Hyde recorded two CDs of her own piano works, for the National Anthology (CSM No.16) and Southern Cross (No.1027). The ABC, in 1996, produced a CD of her two concerti and the orchestral work Village Fair. Her Clarinet Sonata is included on a CD on the Tall Poppies label, and the Macquarie Trio has recorded for the ABC her Fantasy Trio. Her 1992 piece Valley of Rocks has become her best-known piano work since its exposure in the 1988 Sydney International Piano Competition, in which it was by far the favourite choice among the seven Australian works submitted.

Miriam's special awards included the OBE (1981), AO (1991), International Woman of the Year (1991-92) for service to music, bestowed by the International Biographical Centre, Cambridge, and Hon. F.Mus.A. (1995). A gracious compliment was paid her by Macquarie University in the form of an Honorary Doctorate.

Miriam Hyde died in January 2005, a few days short of her 92nd birthday.

Book: Miriam Hyde and the European heritage of Australian music / by Rita Crews.

- Article: One more milestone for Miriam.

- Article: Across her bridge of dreams

- Video: Miriam Hyde talks about and performs "The Fountain"