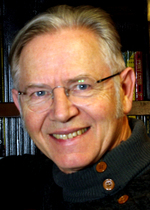 Born in England, Stephen Holgate has lived in Australia since 1965, gaining teaching qualifications and then a Bachelor of Music (1979), majoring in composition, from the University of Melbourne. His fascination with instrumental texture and colour, and his awareness of composing from a sense of 'place', were informed by his composition studies with Barry Conyngham and subsequent influence of Peter Sculthorpe. At the same time, his discovery of Christian mystical traditions began to provide an enduring inspiration and an interior sense of personal 'place'.

Participating in the Darmstadt International Summer School of New Music (1980) brought Holgate into contact with French composers Gerard Grisey and Tristan Murail, motivating an interest in what has come to be called spectralism - orchestrating evolving instrumental textures modelled on the micro or interior acoustic characteristics of sound. These ideas were convincingly integrated with his personal harmonic and melodic language in works including Diptych (1981) for instrumental ensemble, Continuum for orchestra and To the Heavens (1985) for wind quintet.

Besides composing music, Holgate's varied professional career has included innovative community music-development projects (Composer in the Community, Wangaratta; and management aspects of the Bendigo Musician Teacher Project), plus teaching, management, curriculum and consultancy roles in education. This experience motivated a number of works for community and school ensembles. His Master of Education thesis, The Composing Process & Issues for Music Curriculum (1996), researched the nature of compositional creativity and proposed comprehensive models for understanding and evaluating compositions in the technical, idiomatic and aesthetic domains; whilst post-graduate studies in theology (2002) led to religious education leadership roles in Catholic schools and national leadership of the World Community for Christian Meditation (Australia).

Compositions for liturgy or reflecting spiritual themes include four responsorial psalms in the seminal Catholic Worship Book (1984); Tower of the Spirit (1999), a CD and piano/ vocal score comprising 11 songs drawing on scriptural and mystical texts; and other choral and vocal works.

Holgate has received numerous commissions through the Australia Council and his works have been performed and broadcast by the ABC Sinfonia (Lehmann), SSO (Hopkins), QSO (Mills), pianist Michael Kieran Harvey, the Astra Choir (Melbourne), the Melbourne Youth Orchestra as well as by community and school ensembles.

Living in Victoria's 'Macedon Ranges', Holgate has raised six children and recently completed publication of a major 320 page book on the art of his late wife Margaret. Current projects include an album of songs; and presentations for teachers relating to the cultural history of Western music, arts and Christianity.

Further details about Holgate can be found in Sound Ideas: Australian Composers Born Since 1950 (Sydney, 1995) by Brenton Broadstock and The Oxford Companion to Australian Music (Oxford University Press, 1997) by Warren Bebbington.