New world and old world can find common ground through the creative processes of our time but beauty must never be abandoned. 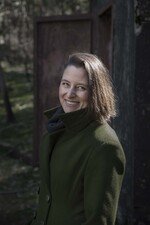 Fiona Hill is a composer specialising in electroacoustics and immersive sound. Described as having 'powerful emotional impact' (The Advertiser), she often explores the dichotomy between the natural and industrial worlds, attempting to find the beauty and resilience of the human psyche where worlds collide.

Recent projects include short film Habituate #1 with Sydney Dance Company's PPY 2020, the electroacoustic work Imago recorded by Lamorna Nightingale and Jane Sheldon as part of the Other Voices project and Out of the Darkness for Alicia Crossley's upcoming album Bass Instincts.

Previous commissions include Pentography premiered by Ensemble Offspring at the Sydney Opera House Utzon Room and the private commission Romancing the Dragon, extended audio-visual work Chromoson in 2010 by Trinity Grammar School's Society of the Arts, for electronics, solo soprano, and moving image in surround sound with multiple projections. Also for the Society of the Arts, in 2008, Hill composed Unity in Blue, an electroacoustic work for small ensemble in surround sound, based on the Godfrey Miller painting Unity in Blue. Hill composed for the short dance film Entanglement Theory, premiering at Dance on Camera in New York 2009 with multiple performances on ABC-TV as well as theatre work Victor Hugo and the Brainstorm. Her composition Spider for Zephyr Quartet's WIRED project 2006 featured on the Australian Broadcasting Commission's Arts Sunday 2007 and at the Australian Computer Music Conference 2008. Earlier chamber music works were composed through a series of commissions from The Firm, which resulted in the performances of Integrals, Signwaves and Decomposition for Strings.

Hill was Composer in Residence at Trinity Grammar School from 2008-2016 and composed a number of student works whilst employed there: for full choir, Out of your sleep, The Cradle and Grace, for string orchestra and full choir, Veni Creator Spiritus and for small ensemble Spira Mirablis, Continetia and Corporis.

Hill has studied composition in Paris, Montreal, Sydney, Melbourne and Adelaide, under composers Liza Lim, Graeme Koehne, Trevor Pearce, Martin Armiger, Jean Lesage and Sean Ferguson. In 2009 she received a grant to undertake studies at IRCAM in Paris after completing a Master of Arts in Screen Composition at AFTRS in 2008. Currently undertaking a PhD at Sydney Conservatorium of Music with an Australian Government Research Training Program scholarship, other awards include the APRA AGSC women in screen music mentorship with Elliott Wheeler (2019), APRA AMCOS Art Music Fund (2018) and Ensemble Offspring's Noisy Women Commission (2017).