Many of my works are motivated by poetry, and the images I find there, or are written in the long shadow of history. 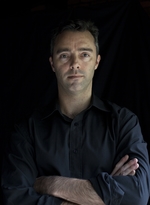 Tom Henry (b. 1971) is an Australian composer whose works have been performed in Australia, the United Kingdom, Denmark, Germany, Switzerland, Austria, Italy and Canada.

Born in Melbourne, he began his musical life as a flautist, which included a year of overseas study with the French virtuoso Patrick Gallois, followed by a period as Associate Principal Flute of Orchestra Victoria.

In recent years he has become increasingly active and commissioned as a composer, and has written works for orchestra, choir, chamber music, solo piano, organ and voice.

His many works for piano include two piano sonatas. His Piano Sonata No. 1 was dedicated to Michael Kieran Harvey and premiered by him in 2011 in Melbourne, with a studio recording released in 2012 on Move Records.

His works for voice include a song cycle on Rilke's Book of Images (Das Buch der Bilder, 2006). In addition, he has twice been commissioned by the Australian Chamber Choir to write major works for their European tours. In both works he chose themes of identity, belonging and displacement. The epic Kakadu Man - the words of Bill Neidjie (2015) is a setting of the words of the late Aboriginal (Gagudju) Elder, Bill Neidjie (1920-2002). The second, Uncertain Journeys (2017) combines contemporary accounts of the refugee experience with parallel texts from the Christian Bible and the 14th century Persian poet, Hafiz.

Recent chamber works include his first string quartet, Scenes from a poet's life (2015), which was jointly commissioned by the University of Melbourne and the Melbourne Recital Centre for the Flinders Quartet; a studio recording has recently been released on ABC Classic FM. After his second string quartet, Shelley on the Water (2016), for the Huon Quartet, his most recent chamber work is a major work for Quintet, Towards Patmos (after Hölderlin)(2018), commissioned by Macedon Music and first performed by Syzygy Ensemble in October 2018.

Henry completed his early composition studies with the late Australian composer Lawrence Whiffin, a former student of Rene Leibowitz, and two of Henry's works are dedicated to his late teacher. He later undertook further studies with Julian Yu, Stuart Greenbaum and Elliott Gyger, completing a Master's in Composition (2012) at the University of Melbourne.