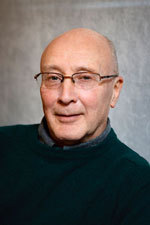 Peter Graham was born in London in 1943. He began playing the trumpet when he was eleven. At fourteen he attended the Huddersfield Music Festival where he received his first formal lessons in composition from the British composer Alan Bush.

A year later he joined the British Army as a junior bandsman and studied at the Royal Military School of Music, Kneller Hall.

Peter Graham migrated to Australia in 1962 and graduated from the Melbourne Conservatorium of Music (B.Mus Ed.) in 1975.

Between 1975 and 1978 he studied electronic music and music composition with the British-born composer Peter Tahourdin.

He later attended courses in electronic music and psycho - acoustics at IRCAM (Paris) and with the Groupe De Recherches Musicales (GRM), Radio France.

His works have been performed and recorded around the world, including performances by Australia Felix, in Germany and Spain, and at the Almeida Festival in London.

From 1990 to 2010 Peter Graham worked with the Department of Education and Early Childhood Development (DEECD), Victoria as a brass teacher. He is now retired and spends his time composing and playing the trumpet in an amateur orchestra.