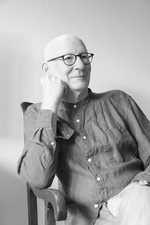 Martin Friedel was born in Germany. Migrating to Australia, his family settled in a remote sawmill community in Victoria. A Daffyd Lewis Scholarship led to Melbourne University, an honours degree in physics and mathematics and a PhD in chemistry, piano studies with Victor Stephenson and, later, conducting with Robert Rosen.

He turned to music in the 1970s and has supported an independent existence through composition across a wide range of form and genre.

Friedel has composed and directed music for theatre productions at major Australian companies; the legendary Australian Performing Group, MTC, Playbox (now Malthouse) and others, collaborating with notable Australian writers such as Jack Hibberd and Frank Hardy.

In 1981, a Fellowship from the Australia Council led to a residency at the fabled Berliner Ensemble in East Berlin.

Between 1989 and 2006 he created scores for more than 50 films, commissioned by Australian and international organisations including the ABC, BBC, and the Paris-based production company Les Films D'Ici. His work was recognised by an Emmy, 'Best Score' at the New York and Chicago Film Festivals, and two AACTA nominations.

Many of his compositions have been commissioned and premiered by Melbourne based Astra, including four large-scale cantatas, based on themes from science: Conversations before the Silence (1990), The Third Planet (1995), Cities of the Mind (2003 - winner of the innaugural Potter Commission Prize), and Electric Songs (2005). Recent chamber music includes Airsongs for violin and piano, Invisible Landscapes for piano and instrumental sextet, and Walk (2012) with the noted spoken word poet TT.O., from his epic 24 Hours.

As Creative Fellow at the State Library of Victoria (2005) he researched Melbourne low-life for his cantata Underworld Songs (Astra 2013). His collection of piano pieces, The School of Natural Philosophy, was recorded by Michael Kieran Harvey and is released on the MOVE label.

A longtime involvement in beekeeping led to Dance of the Bee: Interspecies performance and installation for multiple pianos, choir, a bee swarm in a transparent hive with live video and audio (ASTRA 2015 - with Michael Kieran Harvey).

With cinematographer Simon Carroll, he created History of a Day, a multi-screen audiovisual installation, commissioned and premiered by ACMI (2005) and exhibited at Samstag Gallery in Adelaide and elsewhere.

Current work includes All this you saw with filmaker John Hughes, premiered by Astra, The Arboreana Project, an exploration of the creative possibilities of the sound/music of ancient trees and ecosystems in Victoria's Gondwanan forest remnants, supported by an inaugural Creators Grant from Arts Victoria and soundscapes for Silent Witness an exhibition of photographs of scar trees by Uncle Jim Berg at the Museum of Victoria and two new sonic art works created during Covid lockdowns.

In 2021 Astra will premiere The Word for World - for choir, ensemble and recorded tree and landscape sounds. This work has its origin in the Arboreana Project and reflects on the trees and forests of Taungurung Country.