I believe music is a mirror to our emotional natures as humans. Aesthetically, I strive to write music that is simultaneously joyous and melancholic - embracing those extremes and creating a whole experience larger than the sum of its parts. 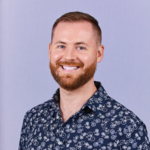 Doust studied composition at the University of Sydney [B.A. 2006] and film music at the Australian Film Television and Radio School [Grad. Dip. 2010]. Doust moved from Sydney, Australia to New York in 2011 as part of the "ArtStart" program through the Australian Council of the Arts.

Doustʼs music has been featured on shows such as MTVʼs Catfish and Girl Code and USA Networkʼs Chrisley Knows Best and he has recently written for the Australian feature documentary "Lessons from Joan" (dir. Walter McIntosh) and Channel 7 television series: "Australia: the Story of Us". Doust's music has also been featured in recent U.S. advertising campaigns for Google Waymo, LPGA and Morgan Stanley, among others.

In addition to music for film and television, Doust is an established composer and arranger for choral ensembles across the United States. Doust is currently the Composer in Residence with the Young New Yorkersʼ Chorus for the 2019 season and is currently writing for NYC ensembles Khorikos and Choral Chameleon and the Grammy award- winning ensemble Chanticleer.

In October 2019 Doust released his debut choral album Reinventions, which takes classic songs from the past 60 years and reinvents them in an ethereal choral setting.

Doust is the composer of the worldʼs first Theremin-based musical: "Falling in Love with Mr. Dellamort", which had its debut showcase in December 2017 and is currently in development with producer Tony Castrigno and Visceral Entertainment.

Other notable achievements include Best Original Soundtrack award at the 15/15 Melbourne International Film Festival, and finalist for Best Original Score at the Tropscore Film Festival and St. Kilda Film Festivals. Doust also wrote the score for the Australian Academy Award (AACTA) nominated short "Forget Me Not" (dir. Emily Dean). His original choral works "As the Rain" and "Unto Me" were also finalists in the Capital Hearings and Elysian Singers Composer Competitions respectively.