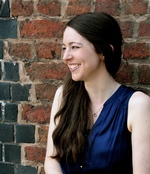 Melissa Douglas (b.1992) is an Australian composer, pianist and piano teacher currently based in the United Kingdom. Her compositions have been performed internationally in Australia, the UK and Europe. Melissa has been commissioned by a variety of soloists, chamber ensembles and festivals. She has written for ensembles such as the BBC Singers, pianists Clare Hammond and Grace Francis, the Magnard Ensemble, the Polaris Duo and the Royal Northern College of Music's Brand New Orchestra.

Melissa's music is evocative, colourful, dramatic and versatile. She predominantly composes for concert hall music (solo, chamber and orchestral works); but she also composes for other art forms, such as short film, theatre, opera and songs for a sacred context. Her piano piece, Solo Gratia, performed by Grace Francis, was broadcast on BBC Radio 3 in 2015 and digitally released on Launch Music International and iTunes. Her composition for alto saxophone and harp, Spheres, was commissioned by the Polaris Duo and features on their debut album illuminate, released in April 2018. The work received its Croatian premiere at the 2018 World Saxophone Congress in Zagreb.