I aim to write music that satisfies the needs of composer, performer, and listener – optimising creativity, skill, and perception – always with deference to the past. 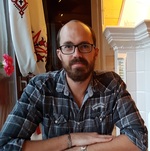 Alex Chilvers is a Sydney-based composer and an Academic Fellow at the Sydney Conservatorium of Music. He studied mathematics and computer programming at Macquarie Unviersity, graduating with Honours in Information Technology, then worked as a programmer within William Forde Thompson's Music, Sound and Performance Lab. After a brief period of private study with Michael Smetanin, he commenced full-time studies at the Sydney Conservatorium in the composition class of Matthew Hindson.

His first major collaboration with a soloist, Combinative Contour Etude composed for pianist Jacob Abela, won third prize at the 2012 "Young Virtuosos" competition of the National School of Music "Lyubomir Pipkov" (Sofia, Bulgaria). In 2013, his orchestral piece SHOTS was selected for the Symphony Australia TSO Composers' School and was performed by the Tasmanian Symphony Orchestra conducted by Kenneth Young.

After graduating from the Conservatorium with with First Class Honours, Chilvers was awarded an Australian Postgraduate Award and commenced PhD studies under Smetanin. While a doctoral student, his Trio I for bass clarinet, violin, and piano was premiered at the 2014 Soundstream Emerging Composers' Forum in Adelaide. In 2015, he travelled to the Karol Szymanowski Academy of Music in Katowice and completed an artistic apprenticeship with the Polish composer Aleksander Lasoń. o Śląsku was composed during his time in Poland and subsequently premiered by the Katowice-based Orkiestra Muzyki Nowej (New Music Orchestra).

In 2016, Carvings for two saxophones and percussion appeared on Sydney-based Translucent Duo's debut album, In-Sync, with guest artist Michael Duke. coûte que coûte? for choir, piano, and percussion was premiered at the High Court of Australia, Canberra, in 2018 by the Luminescence Chamber Singers and Melbourne duo Tess Said So. Chilvers has also collaborated multiple times with the Sideband collective; most recently, his solo harpsichord work Studium O was performed by Stephanie McCallum at the 2019 Sideband: Renaissance concert. Chainwheel for harpsichord (four hands) was commisioned by Anthony Abouhamad and Heath Henn and premiered in 2021.

Chilvers' 2019 PhD thesis explored the role of folk traditions in the music of modern Polish composers. In 2021, he was appointed to a full-time position at the Sydney Conservatorium.