'The fact that you can evoke a whole world of emotion from a few strings stretched across a small wooden box has always fascinated me. My music is all about communicating that emotion.' 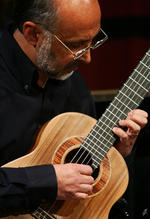 Richard is widely recognised as Australia's leading guitarist/composer. Born in the UK in 1955 he has lived in Australia since his parents emigrated in 1962. Largely self-taught he initially started writing music to expand his own repertoire, but now his works have been performed and recorded by many leading Australian and international players and feature on more than 30 CDs including labels such as ABC Classics, Naxos, Tall Poppies and Move Records. Many of the performers who commission works from Mr Charlton are among Australia's leading guitarists such as Timothy Kain, Karin Schaupp and Slava Grigoryan.

In 2004 Mr Charlton was awarded Instrumental Work of the Year at the APRA/AMC Classical Music Awards for his quartet Stoneworks. In 2005 the UK magazine Classical Guitar, described him as, "producing some of the most inspired and accessible guitar works of the present era."

Mr Charlton uses the guitar in many combinations, collaborating with a diverse range of artists such as Matt Withers and the Acacia Quartet, Guitar Trek, William Barton, didgeridoo and Riley Lee, shakuhachi. (on the ABC Meditation program Classic Flow with guitarist Steve Allen) His work as an arranger has seen him contribute to all three Katie Noonan/Karin Schaupp duo CDs, one of which won an ARIA Award.

Mr Charlton has been invited to lecture on composition at the Guildhall School of Music and Drama in London, at the Elder Conservatorium in Adelaide and at Griffith University in Brisbane. He has also taught in masterclasses at the Royal College of Music in London and has given chamber music classes for the students of Prof. Maria Isabel Siewers at the Mozarteum University in Salzburg.

Many of Richard's pieces for students are currently in the AMEB Syllabus. He has also contributed pieces to the series Modern Times published by Chanterelle and to the Ben Verdery Guitar Series published by Frederick Harris Music in Canada.

Highly sought after as teacher, composer and pedagogue, Mr Charlton has worked with performers all over the world, conducting workshops at many schools and universities.

He is presently the Coordinator of Guitar Studies and Composer-in-Residence at Ascham School.