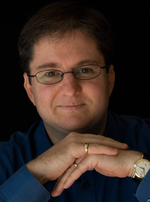 Calvin Bowman was born in Ararat, Victoria, in 1972. He is a graduate of the University of Melbourne, and was the first Australian to graduate with a Doctor of Musical Arts degree from Yale University, with the assistance of a Fulbright scholarship. He is a former Senior Lecturer in Composition and University Organist at the Australian National University.

Dr Bowman's major focus as a composer is in the composition of artsong. His song Now Touch the Air Softly, recorded by Emma Matthews with the Monte Carlo Philharmonic Orchestra for Deutsche Grammophon, was nominated for Best New Composition in the 2009 Limelight Awards, and was recently listed in the 'ABC Classic FM - Classic 100: Love' countdown.

His songs have been lauded by many prominent musicians including Sir Neville Marriner ('...an absolute gem of twenty-first century imagination'); Lee Hoiby ('...it's so rare that I find a living composer who delights me'); and Barbara Bonney ('Your songs are very beautiful and well written').

Dr Bowman's interest in vocal music naturally led to the composition of two operas: Lost to the Music, to a libretto by John Marsden, was written for the National Boys' Choir, whilst The Magic Pudding - The Opera was commissioned and premiered by Victorian Opera in 2013.

Dr Bowman's major awards include an Australia Council Fellowship, and he has also been commissioned by organisations such as Ars Musica Australis and Symphony Australia, as well as by many individuals and ensembles. Commissions for 2017 include works for the Flinders Quartet, Tinalley Quartet, Greta Bradman, Stefanie Farrrands, and a major song cycle for the 2017 Adelaide Festival.

As a performer he has presented the complete Bach organ works twice in public, once in 1995 and again in 2009 for the Melbourne International Festival where he performed them in a single seventeen-hour sitting. For the latter feat he was nominated for a Helpmann Award. As keyboardist he has premiered works by Philip Glass, Peter Sculthorpe, Ross Edwards, Richard Mills, Graeme Koehne, Andrew Schultz and others, and appeared as soloist with many of the major Australian orchestras.

Calvin Bowman is an exclusive Decca/UMA artist. His first recording of artsong entitled 'Real and Right and True' is slated for release in July 2018.