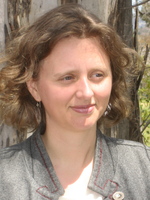 Corrina Bonshek writes gentle, spacious music inspired by nature and her own meditation practice. Her music has been described as 'beautifully shaped and contemplative' (Clare MacClean, 2013) and 'deeply spiritual in intent' (Anne Boyd, 2002).

Bonshek graduated with a PhD in Contemporary Arts in 2007 from the University of Western Sydney, where she studied composition with Dr Bruce Crossman and musicology with Dr Sally Macarthur. In 2010, she received mentoring from Grawemeyer Award-winning composer Professor Chinary Ung who recently described her music as 'connecting to the essence of South-East Asian music - timelessness'.

Recent projects include The Nature of Silence (2015) for Thai classical musicians and two singers, co-created during a 11-day residency at Burapha University, and the installation Journey to the Centre - music for Centennial Park Labyrinth (2014) for string quartet and nature sounds by Wild Ambience. Journey to the Centre is permanently installed at Centennial Park Labyrinth Sydney and was downloaded 5,000 times by visitors to the labyrinth in the first year. This piece was also featured on ABC TV's Compass Program, ABC Radio National's Off Track and is the subject of a 30-minute feature for ABC Radio National's The Rhythm Divine.