I am interested in an entertaining yet sophisticated crossover between art and popular music: Music that harnesses the wealth of tradition from the past, yet celebrates the vitality of anything that's out there to be found! 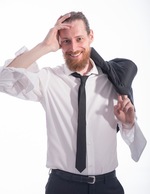 Paul-Antoni Bonetti (b. 1981) developed a love for both composing and songwriting from a young age. His work explores the appropriation and adaptation of a diverse range of styles and sounds within a conventionally notated acoustic performance medium. This frequently involves stylistic allusion to hip-hop and rap, jazz, and electronic dance music; as well as styles and genres from earlier art music periods.

This creative approach has seen the completion of several major works written for symphony orchestra, chamber choir, and instrumental and vocal chamber ensembles. Many of these works have been commissioned by nationally respected ensembles and resulted in broadcasts and/or performances by the Tasmanian Symphony Orchestra, Orchestra Victoria, Brisbane Symphony Orchestra, Adelaide Chamber Singers, Brisbane Chamber Choir, Queensland Symphony Orchestra String Quartet, National Youth Choir of Australia and The Australian Voices.

Bonetti is also active as a singer/songwriter, and has released two albums featuring diverse song writing and studio instrumentation recording.

He has a PhD in Composition from the Elder Conservatorium of Music, completed under the supervision of Graeme Koehne and Charles Bodman Rae. He also has a Bachelor of Music in composition at the University of Queensland and a Graduate Diploma of Education at Queensland University of Technology.

Awards and experience include the APRA prize for the 2006 3MBS National Composer Awards; 2003 University of Queensland Percy Brier Award; an Australian Music Centre - Northern Rivers Performing Arts composition prize in 2007; the Symphony Australia composer development program, several Tasmanian Symphony Orchestra composer programs, and composer in residence in for The Australian Voices in 2008. His choral and orchestral works feature in national and international performances and CD releases.

Quite apart from being a music geek, other interests entail cooking, wine and poetry, generally savoured in that order.