'Composing, for me, is a continual exploration of, and revel in, sounds - shaping, manipulating and polishing - akin to a potter working with clay or a painter with paints.' 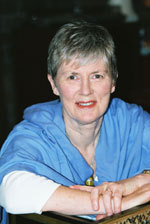 Born in New Zealand in 1947, Diana Blom moved to Sydney, Australia in 1969. She studied music at the University of Canterbury, NZ (B. Music), University of Sydney (M.Mus. composition; PhD Minimal music: roles and approaches of teachers engaging students with a contemporary art music through composing activities), and the University of Michigan (M.A. musicology). Composition studies have been with Peter Sculthorpe and Ian Farr.

Blom was composer-in-residence with the Australian Opera in 1974 and commissioned to write a children's opera, The Pied Piper. Other commissions include songs for voice and piano, voice and harp for the ABC Radio Coming Out, Ready Or Not show; music for an ABC-TV four part series on Daisy Bates; music for Alitji in Wonderland, the Marionette Theatre of Australia's shadow puppet translation of 'Alice's Adventures' into Pitjantjatjara and works for Italian pianist/toy pianist, Antonietta Loffredo. Music theatre works for children include The Muffin Fiend (based on the book by US author Daniel Pinkwater) and The Golden Bird (libretto by Australian-Sri Lankanese writer Chitra Fernando).

Diana lived in the U.S., Hong Kong and Malaysia for ten years during the 1980s before returning to Sydney, and the sounds of these countries' musics can be heard in some works. Recent works include The Blue Ice Cave (piano/toy piano), Sonata neoclassica (piano), Playing with Fire (CD soundbed/live acoustic piano), Triptych (3 voices, viola, piano, percussion), freefall (piano duo), and songs for US tenor, Kevin Hanrahan - The Ballad of the Canterbury Pilgrims (3 voices and piano), song cycle Portrait of America and At the end of the world we learn to dance. She has an interest in Australasian writers and has set to music words of Lloyd Jones, Fiona Kidman, David Malouf, Helen Garner, Jocelyn Ortt-Saeed, Tim Malfroy, Robyn Ravlich, Peter Goldsworthy and Jennifer Rumsey. Compositions are published by Wirripang Pty. Ltd, Orpheus Music and Wai-te-Ata Press.

Music Composition Toolbox, a composition textbook co-authored by Matthew Hindson and Damian Barbeler is published by Science Press. Research publications are focused on university music performance, the artist as academic, music and war, preparing new music for performance and performing live vs performing for a recording.