I see composing as synonymous with the visual arts; crafting musical lines as if they were drawn by a brush. I find inspiration in books, poems, artworks, philosophy, and spaces natural and constructed, bringing together these random threads and seeking to render them in beautiful, abstract sound. 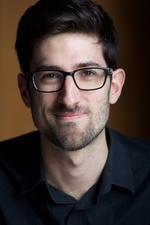 Andrew Aronowicz (b. 1989) has composed music for a number of major Australian ensembles and performers, and his music has been broadcast around Australia on ABC Classic FM, and on 3MBS Fine Music Melbourne and PBS 106.7. He has also featured twice in ABC Classic FM's New Waves podcast series. He has been mentored by various Australian composers, including Stuart Greenbaum, Elliott Gyger, Katy Abbott and Brenton Broadstock, and, more recently, by Michael Smetanin and Mary Finsterer. Andrew holds a Master of Music from the University of Melbourne, and was an Australian Postgraduate Award recipient during his post-graduate candidature. He is also the recipient of an Australia Council ArtStart grant.

In May 2016, his orchestral composition Strange Alchemy was chosen as the Australian Under-30 entry in the 2016 International Rostrum of Composers, held in Wroclaw in June of that year. Andrew has received various commissions, from the Melbourne Symphony Orchestra and Cybec Foundation, Arts Centre Melbourne, Syzygy Ensemble, Forest Collective and Sarah Curro (violinist), among others. His music has been performed as part of the Melbourne Metropolis New Music Festival and the SoundSCAPE Festival in Maccagno Italy, and he has been a participant in Speak Percussion's Emerging Artists program and the Tasmanian Symphony Orchestra Composer School.

In 2016, Andrew was commissioned to write new works for Plexus Ensemble, and also for Syzygy Ensemble as part of the Glen Johnston Composition Award at Macedon Music. His work, Following the Blackbird was also presented in a concert in June, featuring flautist Naomi Johnson and presented by Forest Collective. Andrew was also composer in residence for a second year at the 42nd annual Border Music Camp in Albury, NSW.

Aside from composing, Andrew is also a passionate educator and writer. He is a regular contributor to Limelight magazine, as a reviewer and feature writer. He has also contributed to some of Australia's most notable arts publications, both online and in print, such as the Australian Music Centre's Resonate magazine, 2mbs Fine Music Magazine and new music blog, Partial Durations. Andrew has also lectured in music theory at the University of Melbourne's Conservatorium of Music, and delivers pre-concert talks for both the Melbourne and Sydney Symphony Orchestras. He is a regular volunteer at 3MBS Fine Music Melbourne, where he presents The Romantics every Saturday morning on 3MBS Digital.