‘Wata’: Blown Together by the Wind

Sam Curkpatrick summarises some of the ideas and narratives behind one of this year's major Australian music events, 'Wata'. The project, premiered in Melbourne earlier in 2021, was led by pianist and composer Paul Grabowsky and brought together songmen, improvisers and a symphony orchestra in a new kind of large-scale, collaborative work. The words quoted in the article were spoken at public forums held around the week of rehearsals and performances.

How do you orchestrate a musical gathering between a symphony orchestra, improvising soloists and Aboriginal songmen, all from vastly different musical traditions? This is just what pianist and composer Paul Grabowsky set out to achieve with 'Wata: a gathering for songmen, improvising soloists and orchestra,' a composition that premiered with the Melbourne Symphony Orchestra and Australian Art Orchestra in March. This ground-breaking work transforms the ways that symphony orchestras might collaborate with Aboriginal people and song traditions. 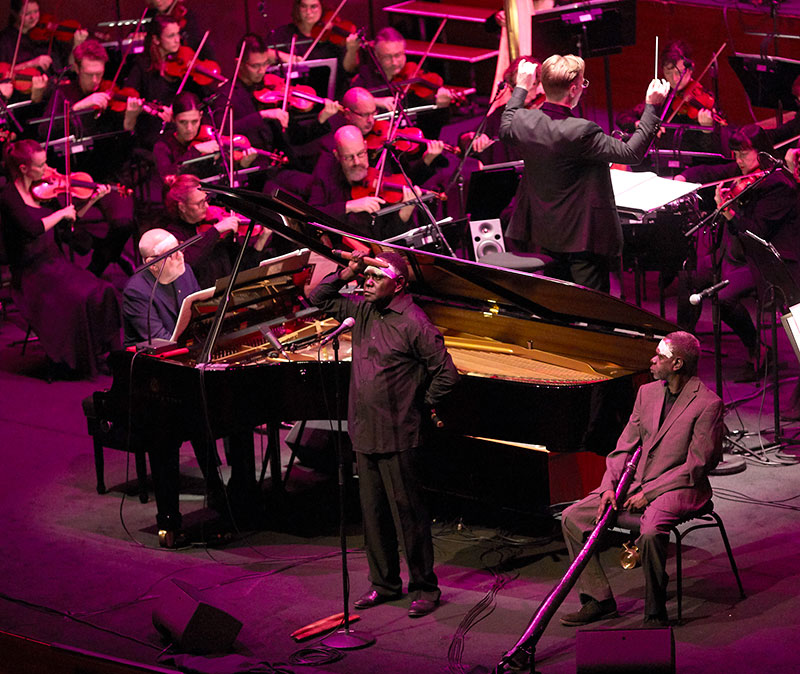 For Wägilak singers from Ngukurr, Northern Territory, 'Wata' is a song used for smoking or purification ceremonies within the manikay (public song) tradition. When someone has died, family gather to sing the wata (wind) songs that blow the mokuy (ghost) of the deceased back to his or her ŋaraka-wäŋa (bone-country). Wata is also a phenomenon that connects families from different country, as it blows large clouds from out at sea, to fall as rain on the parched land.

Since he first travelled to Ngukurr in 2005, Grabowsky has experimented with different ways that improvising musicians might meaningfully engage with manikay singers. Significantly, this began with an invitation from Wägilak elder Sambo Barabara, who understood manikay itself as an opening for engagement with musicians from the Australian Art Orchestra, an opportunity to grow relationally and for different musical voices to be blown together in new ways.

'Wata' reflects this collaborative approach and inverts usual assumptions about engaging with Aboriginal people and cultures. Rather than bringing manikay into Western traditions, non-Indigenous musicians are invited by Wägilak songmen to discover their own musical voices within manikay.

Grabowsky's composition is built around the intricate structures of manikay and complex yiḏaki (didjeridu) and biḻma (clapstick) patterns, which form the core structure of manikay. For ceremonial leader Daniel Wilfred, 'Everything comes out of the yiḏaki and biḻma.' These rhythmic patterns encode ancestral stories that tell of the foundation of the land and its peoples, as well as important connections between different families and estates.

'Wata' is the first large-scale orchestral composition to begin with such rhythmic details, rendered with precision in different sections of the orchestra, such as the cellos and percussion. In this, Grabowsky has been inspired by the notion of the yarraṯa (string line), the continuation of law through performance. For Wilfred, songs that have been passed down for generations and tell of the creation of Wägilak country, can be heard 'coming out of the orchestra.'

Grabowsky's orchestration allows the space to shape the performance as a traditional smoking ceremony. Wilfred experiments with new ways of performing manikay, inspired by the musicians he works with and the sounds he hears around him. He explains how 'Wata' is evocative of the sacred island Luṯunba and has developed new material on this theme. This forms the basis of an improvised duet between Grabowsky and Wilfred, toward the end of the piece. 'I learnt about something from listening to Paul. I told him, "I like your sound. Let's play something together."'

Such sections of improvisation that have been incorporated into the score allow improvising musicians to discover their own musical voices within manikay. This process is central to Yolŋu ceremony, which is concerned with the 'gathering up' of different stories and people in new ways. 'We meet through the manikay. Together you know, manikay and orchestra - black crow and white cockatoo,' says Wilfred. 'We fly together.'

In this way, 'Wata' exemplifies the classic Yolŋu 'two-ways' approach to culture, which is always expanding through new relationships, while remaining grounded in rich and complex ancestral expressions. 'We sing our own song but we are also making something new,' says Wilfred. This approach can also be discerned in more popular expressions, as in the band Yothu-Yindi and the songs of Gurrumul Yunupingu.

Musicians from the Australian Art Orchestra have reflected on their experience of improvisation as a bridge between cultures, and performance as an event that renews relationships through listening and sharing. Clarinettist and sound artist Aviva Endean reflects on the process of improvising. 'As improvisers, we can just play together and that feels like an extraordinary thing. But, at the same time, there is something really special about the time it takes to pay attention, to listen. You can't fast-track that. You can't absorb everything in one instance. We have to take the time to be together, to listen.'

Grabowsky also understands the importance of this relational paradigm, which goes to the heart of musical performance and structure: 'Music is relational. We get very hung up in Western musical education on fixed entities, like pitch, rhythm and harmony. But what is important in music is the relationships between things. That's what music is really about. And when you like a piece by Beethoven, for example, what you really like is the relationships between all the different elements in it.'

The challenge for the Melbourne Symphony Orchestra, as it has been for the Australian Art Orchestra, will be sustaining their relationships with Aboriginal singers in mutually enriching and expansive ways. As Peter Knight, Artistic Director of the Australian Art Orchestra reflects on years of collaboration with Wägilak musicians, 'Music is a powerful way to develop relationships and build community. We move from the intention to form friendships, to seeing what music comes from those friendships. That's a really moving and inspiring process to be a part of.'

'Wata' has shown that unique and relevant performance with Aboriginal people in Australia is possible, through an approach that takes seriously the structures within traditional song that allow for collaboration. Yet more important are the relationships that developed through song. This itself is central to the manikay tradition. 'Manikay is people gathering up. We are gathering up with the orchestra, putting manikay with the orchestra; so, we are doing our buŋgul (ceremony) and our manikay.'

'I'm sharing my songs with a new generation,' explains Wilfred. 'That's how those songs are going to stay alive. We are not going to look back but forward, because we are learning different things.'

Samuel Curkpatrick is an Adjunct Lecturer at Stirling Theological College, University of Divinity. His recent book Singing Bones: Ancestral Creativity and Collaboration is available through Sydney University Press. Since 2010, Sam has worked closely with Wägilak singers from Ngukurr, notably Daniel Wilfred, and been a Research Collaborator with the Australian Art Orchestra, on projects with Paul Grabowsky and Peter Knight, teaching at the AAO's annual Creative Music Intensive.