The Song Company celebrates its 30th anniversary this Thursday with a concert featuring a composite mass in which each movement is written by a different composer: Graeme Koehne, Ross Edwards, Dan Walker, Stephen Cronin, and Gerard Brophy. The individual components of the mass will be interspersed with brief words from various past participants in The Song Company's 30-year-history.

Acclaimed didjeridu player and composer William Barton will join The Song Company for this concert. The program will also include Gregorian chant and music by Rachmaninov.

The performance marks the retirement of The Song Company's long-standing bass, Clive Birch, who will leave the ensemble in December after 25 years. The current line-up also includes Susannah Lawergren (replaced in Thursday's concert by Alex Oomens), Anna Fraser, Hannah Fraser, Richard Black and Mark Donnelly, as well as the artistic director Roland Peelman.

Over the years, artists such as Jo Burton, Jane Edwards, David Hamilton and Brett Weymark have also sung in the ranks of The Song Company. After ill-health forced Charles Colman to resign in 1988, the group became a sextet led by John Grundy. Roland Peelman was appointed as artistic director in early 1990.

Commissions from living composers had been an important part of the Company's vision from the beginning, and under Peelman's leadership the ensemble has continued to commission, premiere and record numerous new Australian works (for some of these, see the listing here). The Company also seeks to nurture emerging composers through MODART, their biennial young composer forum, supported by the Australian Music Centre. 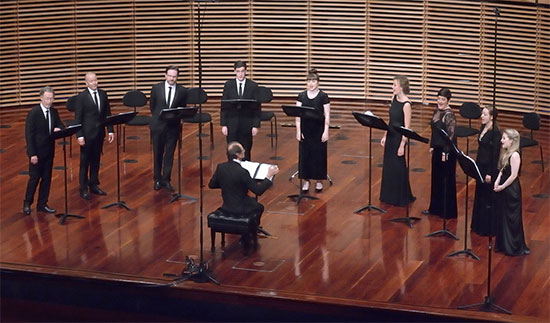 Singers of The Song Company and Roland Peelman
at Sydney Grammar School on 9 October 2014. © Peter Hislop

© Australian Music Centre (2014) — Permission must be obtained from the AMC if you wish to reproduce this article either online or in print.