Songs of love, place and identity

by Louise Denson and Janice Black

Louise Denson and Jan Black write about their large-scale work Cooktown Cantata to be premiered in Brisbane on 12 June 2021, with more performances to follow at Nature's Powerhouse, Cooktown on 17-19 June 2021 during the Cooktown Discovery Festival.

The Cooktown Cantata - Songs of Love, Place and Identity was commissioned by the Vera-Scarth-Johnson Gallery Association, Cooktown, to mark the 250th anniversary of Captain Cook's 48-day stay in Cooktown in 1770 to repair damage to his ship, The Bark Endeavour. A 60-minute work for three vocalists and 6-piece instrumental ensemble, it consists of twelve songs thematically linked to the main character - botanical illustrator and conservationist, Vera Scarth-Johnson. The work reflects the historical, geographical and social contexts of Cooktown and its people, and celebrates its unique role in Australian history as the site of one of the first contacts between Indigenous Australians and Europeans, and of the first gesture of reconciliation between the two cultures.

The idea of creating a signature event for the Cooktown Festival came about by chance. Librettist/creative director Jan Black was holidaying in Cooktown and found herself conversing with two women who are part of the Vera Scarth-Johnson Gallery Association. They wondered aloud how they could honour Scarth-Johnson's contribution to the community and the legacy of her art work as part of the festival. Jan, whose recent credits including directing State of Origin - The Musical, and the 2017 and '18 Brisbane Shakespeare Festival, immediately started investigating Vera's life and work, discovering why she had been such a significant figure on the local scene.

Vera Scarth-Johnson resided for 27 years in Cooktown. Born in Morley, Yorkshire, England, she was strongly attracted to nature from her earliest days, scandalising her parents by wanting to become a horticulturalist or a farmer. She migrated to Australia in 1947. The less socially restrictive atmosphere in the colony allowed her to work in her chosen profession, and she became the first woman in Australia to hold a sugar cane assignment on her property at Bundaberg. In her spare time, she drew and painted, developing her skill as a botanical artist.

A collecting trip eventually took her to Cooktown, which she found utterly enchanting. Moving there in 1972, Vera dedicated herself to painting the same flora that Joseph Banks, naturalist on the Endeavour, had collected and taken back to England, to be eventually depicted in the famous Florilegium collection. Her dramatic and sensitive botanical illustrations and written comments are contained in the book National Treasures - Flowering plants of Cooktown and Northern Australia, a testament to her love of the unique natural environment of Far North Queensland.

Jan felt strongly that the story of Vera lent itself to the form of a song cycle. However, she soon realised that Vera's admiration of Joseph Banks and her respect for the Indigenous people of Cooktown were essential to her story. She had a particularly important friendship with Guugu Yimithirr artist and Elder, Tulo Gordon, who shared his knowledge of country and all it contains with her.

Thus, the three characters in The Cooktown Cantata are Vera, sung by Australian soprano Margaret Schindler; Joseph Banks, sung by renowned baritone Jeffrey Black; and Tulo, sung by singer/songwriter Derek Rosendale, nephew of Tulo Gordon. The songs reflect their shared wonderment at the endless beauty and mystery of the natural world as a central theme.

The libretto was developed through study of Vera's paintings, letters, writing and memorabilia housed in Nature's Powerhouse, Cooktown, interviews and conversations with current residents of Cooktown who knew her, and creative collaboration with Willie Gordon (son of Tulo Gordon), artist Gaynor Hooper, and Indigenous musician Dora Gibson.

The score is by pianist and composer Louise Denson, who was invited to join the project in early 2019. Louise has had an active career in Australia as a jazz composer and performer, in addition to lecturing at Queensland Conservatorium Griffith University for over 20 years.

Jan Black explains the collaboration, 'There appeared to be an easy compatibility between Louise's musical style, Vera's love of jazz and my choice of the classical song cycle as a structure for the work. As Louise and I began to discuss our ideas for the songs, other similarities emerged. As a relatively recent immigrant to this country (Canadian by birth), Louise also has a great love of the Australian native flora and fauna, as well as an interest in the female naturalists and botanical illustrators of the early 20th century.'

As noted above, parts of the libretto and score have been developed in collaboration with Indigenous artists from the Cooktown/Hopevale area.

The dramatic opening of the Cantata is a poem in language which tries to imagine what the Guugu Yimithirr people might have thought and felt as they saw the Endeavour coming ever closer to their land. This is followed by one of two songs written by Derek Rosendale, which tells the creation story of the Endeavour River as told by Willie Gordon, 'Gubal and the Wahalumbaal Birri'.

We are then introduced to Vera through two songs, 'Still the Mystery Exists'and 'Me Father Gave Me an Acre of Land'. Vera's original words are housed in the poetry of 'Still' and set to lush, jazz-inflected harmony: There is a mystic essence in nature which calls to most men……what it is no man knows but this extra something speaks to the innermost soul and brings joy and gladness to all that seek it. 'Me Father' is based on an early 17th-century English folk song and tells the story of Vera walking among the slag heaps from the coal mines with her grandmother and experiencing the magic of seeing flowers grow in such a bleak and devastated landscape. 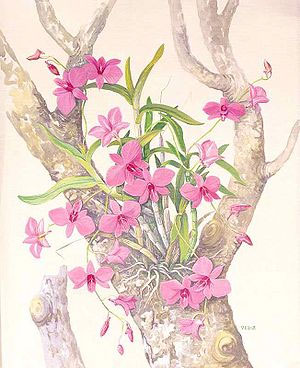 Now we meet Joseph Banks in a moment of British music-hall mirth. He bounds in to sing 'In the Name of Science', telling the story of the first sighting and naming of the kangaroo, 'Gangaruu' in Guugu Yimithirr, and reflecting on the oddities and wonders of the 'New World'. He then sings an ode to the Cooktown Orchid in 'Flower of Cooktown', joined at the end by Vera and Tulo to sing Lovely orchid, wondrous and rare/Nestled in frangipani's embrace/Pink and Lavender in tropical air/Beauteous symbol of our place.

Vera and Banks spend a romantic moment together across time in 'Reflection'. As an artist and a woman who knew her own mind, wasn't afraid of adventure, and loved music and a glass of red wine, Vera used to say, according to her friends, that she reckoned she and Banks would have got along fine!

The libretto grapples with the profoundly disturbing nature of the interactions between Australia's original inhabitants and the European settlers in a duet between Vera and Tulo. 'The Picnic' contrasts the pastoral notion of a relaxing outdoor luncheon with the horrifying use of the word as a euphemism for a massacre of Aboriginal people - a 'picnic with the natives' (see, for example Joanna Mendelssohn's article). The Red-flowered Black Mangrove symbolises the bloodshed, with the wish that it should 'weep no more'.

Vera's commitment to conserving the beauty of the natural environment around Cooktown is manifest in 'My River', an impassioned protest against moves by developers and mining interests to exploit the shores of the river for short-term financial gain. The fact that the view from Grassy Hill over the Endeavour River is virtually unchanged since Cook first arrived is testament to the success of the people of Cooktown in resisting attempts to despoil their natural heritage.

Tulo accompanies himself on guitar for his song, 'Everything That's Free'. It expresses his family's connection to country through the wind, water, forest, moonlight and the earth itself.

The final trio builds to a harmonic reconciliation of the three characters. In 'The Land Beyond, Beyond', Vera, Tulo and Banks hope that their shared love of this bounteous and mysterious land will lead to a future where mutual respect and understanding can foster a genuine reconciliation between Australia's Indigenous and non-indigenous people.

Given the range of elements drawn together in the libretto for The Cooktown Cantata, it was evident that the music would need to represent an equally broad range of genres and approaches. Anglo-Irish folk song is evoked in 'Me Father Gave Me an Acre of Land' and 'In the Name of Science' through the use of the bass and piano to generate the necessary rhythmic drive, with the flute and violin embellishing the melody. Derek Rosendale's two feature songs, 'Tulo's Song' and 'Everything That's Free', are in the country-folk mould. The jazz elements - which Vera would have enjoyed - are evident in the harmonic language of the ballads, 'Still the Mystery Exits', 'Flower of Cooktown' and 'Reflection'. The odd-metre bossa nova, 'My River', also features the tenor saxophone, the quintessential jazz instrument. The closing trio, 'The Land Beyond, Beyond', has an anthemic grandeur and is the most 'classical' of the songs which comprise the score.

This project has had a long gestation - one year longer than anticipated due to the interruptions and restrictions which we all know about far too well. Jan and Louise are looking forward to the June performances with great anticipation, and gratefully acknowledge the financial support of the Vera Scarth-Johnson Gallery Association, Arts Queensland Regional Arts Development Fund, the Gambling Community Benefit Fund, Cook Shire Council, Cooktown Discovery Festival and Amanda Talbot. They would also like to thank everyone who is contributing in kind and in spirit, including Rio Tinto, Queensland Conservatorium Griffith University, Judith Wright Centre, 4MBS, the Cooktown Men's Shed, Lois Redman, Jean Stephan, Jo Wynter, and all our friends and supporters in Cooktown and surrounds.