Jeanell Carrigan's long-term research into the works of early Australian composers has resulted in a new series of published volumes of piano works by Australian composers Iris de Cairos-Rego, Marjorie Hesse, Katharine Parker, Una Bourne, Esther Kahn, Esther Rofe, Linda Phillips and Frank Hutchens. These collections can be purchased from the AMC - please follow the links to the AMC Shop in the article below. See also the Wirripang website for details about the series.

While researching Australian women composers for the book Composing Against the Tide in 2015-2016, I came across a great deal of wonderful piano music written by an astounding number of composers who had faded into obscurity. The music was of high quality but scattered across many libraries, in archives, sometimes unpublished or long out of print and just not accessible to today's teachers and performers.

To remedy this situation at the time, I published, with Wirripang, three volumes of 65 piano compositions, written by 26 women composers (for details, see: Australian Heritage Collection volume I, volume II and volume III). This series contained not only scores but biographical, editorial and performance notes, and recordings of works of these composers, all born between 1860 and 1915.

A new series of publications is occupying a lot of my time now. In the new The Composers' Series, I have created comprehensive volumes of selected individual composers. 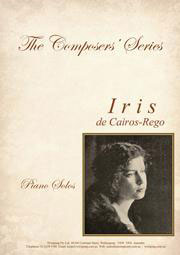 The first volume, completed in 2019, deals with the Sydney-based composer Iris de Cairos-Rego (1894-1987). Born into a musical family - her brother Rex was a singer, pianist and composer of some note in the early part of the 20th century, and her father George de Cairos-Rego one of the founders of the NSW Music Teachers Association - Iris was a child prodigy who performed concerts in the Town Hall when she was still too small for her feet to reach the floor from the piano stool. She studied in Germany in 1907-1910 - an impressive portfolio of reviews and concert notices can be read on the National Library's Trove. Information about this wonderful pianist and composer was very hard to come by, as I noticed when researching the Composing Against the Tide book, until a colleague who works at Frensham School for Girls in Mittagong, NSW, told me about their amazing archives. I had known that Iris had been a teacher at Frensham but was unaware of the wealth of material they had collected about their teaching staff.

Iris de Cairos-Rego wrote at least 22 works for piano solo, a set of five duets and some chamber music which includes piano (some of these arrangements of solo piano works). The works that could be found in either manuscript or early, out-of-print publications, have now been published in the first Composers' Series in a set of three volumes: 1a) Piano Solos; 1b) Piano Duets and 1c) Chamber Music. Iris de Cairos-Rego's Piano Trio is especially interesting - only a manuscript copy of that score exists at the National Library of Australia. In 1912 Iris de Cairos-Rego played in the Salon Trio - this trio had formed probably about 1911, and the original pianist in it had been Mirrie Solomon (Hill), with violinist Dorothy Curtis and cellist Florence Brown. The trio performed in Sydney to great acclaim for several years and it can be assumed that Cairos-Rego's trio was written for the Salon Trio to perform. There is no date on the manuscript, and it is quite likely the work wasn't performed in public but merely rehearsed and discussed.

Marjorie Hesse was a student of Frank Hutchens when she joined the NSW Conservatorium in the early 1930s. She was a prolific composer who wrote over 45 works for piano, mostly works of a pedagogical nature, and many duets. Almost all the works were published in her lifetime but have long been out of print. Some of those works still appeared on the AMEB syllabus after they'd ceased to be available for purchase. Hesse's entire collection of piano music now forms the second part of the Composers Series, again in three volumes: 2a) Piano Solos (of a more exacting nature), 2b) Educational piano works and 2c) Piano Duets. Hesse was a colourful character with lifelong connections to the NSW Conservatorium as a teacher and the AMEB as an examiner, and her life story was worth researching and writing about.

Kitty (Katharine) Parker (1886-1971) was described by her teacher and mentor, Percy Grainger, as 'the most gifted piano pupil I have ever had'.1 Her music is absolutely exquisite, rewarding to play and enjoyable to listen to. Unfortunately, only a handful of piano pieces - seven - could be located, and are included in the third volume of the Composers Series.

Una Bourne (1882-1974), another child prodigy, was for a time one of Australia's most famous pianists. She recorded many albums for His Majesty's Voice (unfortunately all now lost) and wrote 18 one-movement piano works. There were several piano pieces in the archival collection of her material at the State Library of Victoria - unpublished - and one score only available at the British Library (this one unusual as it had been part of a publication produced in Australia in the 1920s). The Composers' Series volume 4 is devoted to Una Bourne, reciting facts about her interesting life and presenting all the piano compositions with recordings.

Esther Kahn (1877-1962) was a founding member of the Australian Music Therapy Association. She spent many Saturday afternoons taking the tram from Randwick, Sydney, to the Gladesville Mental Hospital to perform music for the inmates. She wrote about her experiences and about the sort of music that was most suitable and easily accepted in articles published in the Sydney Morning Herald. She also composed at least 22 works for solo piano - see Volume 5.

Esther Rofe (1904-2000) was an imaginative and very skilled composer, and chiefly one of ballets. Her output of works, written especially for piano solo, is small, and many of the them were arrangements of existing works. The composer May Howlett describes a meeting with Esther Rofe:

In 1984, I was invited by Ron Danielson, the original Designer/Director of the Performing Arts Museum in the new Victorian Arts Centre, Melbourne, to become part of the 'performing' element. In the quiet times, I also acted as a guide and, in this capacity, I approached a frail, very weary-looking elderly lady hovering at the entrance carrying a large suitcase. I asked her if I could help. She put down the suitcase and asked to see the Director. She looked very downcast. In a quiet voice, she said, 'I am Esther Rofe.' 'Esther Rofe, the composer?' I almost yelled, completely taken aback. She seemed almost shocked that I should recognise her or her status. 'Whatever are you doing carrying that suitcase - it's much too heavy for you?' 'I've been everywhere I can think of', she said, on the verge of tears, pointing to the case, 'Nobody wants my music - it's all in here, and I can't carry it around much longer; I need to find a home for it somewhere - I was hoping that the Director might be interested.'2

For a composer of Rofe's status it is unbelievable that she could find no home for her music. Thankfully, Monash University now holds all the Rofe archives where they are kept in good order so that everyone can access her ballets and chamber music as well as programs and reviews. The unpublished piano music is now available as volume 6 of The Composers' Series.

Linda Phillips lived for over 100 years and though she was a prolific composer, she is mostly remembered as a music critic for The Sun in which capacity she was responsible for, among other things, instigating the Sun Aria vocal competition. Of her many piano compositions only two were published in her lifetime, and now her piano solos are available as volume 7 of the new series.

That there has been no publication available for purchase of the collected piano works of Frank Hutchens is scandalous. Hutchens taught at the NSW Conservatorium over a period of more than 50 years, and wrote many works which are still on the AMEB syllabus. His works are innovative, excellent for developing various pianistic skills, as well as being musical gems. Hutchens's works for piano are included with recordings as Volume 8(a) advanced solos, 8(b) intermediate standard piano solos and 8(c) elementary works for piano.

Also further Volume 9 containing the piano solos of Lindley Evans will be complete by end of October 2020.

Many of the composers discussed here only wrote piano music. Many of the works were written for students or created for the AMEB. Perhaps these two facts could partly explain why they have been forgotten. They were also first and foremost pianists or teachers of piano and secondly - or thirdly - composers. Most were self-taught composers but all left a legacy of wonderful and useful piano music that it has been my honour to bring back into circulation.

1) Memories of Rose and Percy Grainger by Kitty Eisdell (Parker) 1936 - enclosed in a letter on 7 February 1936 in the collections of the Grainger Museum, Melbourne.

2) This anecdote was supplied by the Australian composer May Howlett.

© Australian Music Centre (2020) — Permission must be obtained from the AMC if you wish to reproduce this article either online or in print.