Setting Leunig: 'A simple song like a tiny bell'

As their last hurrah for 2015 - and the final project for outgoing Artistic Director Roland Peelman after 25 years - The Song Company's All-Leunig Song Almanac is a typically ambitious undertaking: 12 brand new songs, one for each month of the year and each from a different composer, setting texts by one of Australia's most popular observers of life, Michael Leunig.

A different but equally generous donor was needed to support the composition of each song/month for this unique Almanac; barrister and erstwhile pianist Deborah Robinson funded mine. (I suggested she might like to be philanthropically involved after she had made the fatal mistake of admiring some of my piano music in 2010.)

The process began about a year ago, when Roland approached me about composing July - essentially midwinter - and asked me to select a suitable poem from Leunig's vast back catalogue. After a few hours online and browsing through the shelves of Better Read Than Dead I found my text. 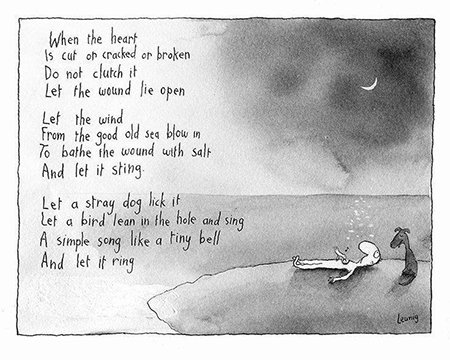 As far as I can work out the poem and the image on the left were first published in 1980. For me, this simple poem has a beautiful, tender and comforting wisdom for anyone who has suffered in life - which is to say, everyone - and expresses it in what I think of as a very Australian accent; it suited July because we sometimes need a reminder of the possibility of healing and regeneration in the depths of winter when summer feels like a distant memory.

A few ideas were also brought in from outside the text, the first being that I imagined writing this song for an audience of one specific person. This is an idea more popular with authors of literature to help them focus content and tone, but it became an important device particularly in the way that I was interpreting the text.

Roland had also mentioned previously getting me to write something for The Song Company that drew more on my experience writing and producing pop music (he liked the work I had done for MA particularly) so I also had a feeling he wanted me to bring some of that to this project's inevitably wide and eclectic range of styles and approaches.

So I began by setting the poem as an unaccompanied melody. After all, there's a fairly strong directive in the final stanza: 'a simple song' is required. I then developed the melody in a four-part harmony setting, which culminated in a brief, tentative exploration of the bell-ringing possibilities suggested by repeating the phrase 'let it ring', where the singers extended the sound through the final, soft palate sound of the 'ng'.

Roland astutely picked up on the potential of this bell-ringing texture in an early draft, and encouraged me to take it further. The end result, then, is a piece in two halves: the simple song to begin with, and then, just as it's concluding, the bell-ringing texture emerges, increasing in density until, moving backwards through the text and in fragments shared polyrhythmically in all six voices of the company, we pass through a bell-rung, wind-blown storm from the sea, finally reaching safe harbour again with the first line (and title) of the song.

As I write this, I have just come back to my studio after a rehearsal with the Company and I'm quietly excited - it's sounding beautiful. It's always a pleasure to work with these musicians who are as talented as they are sensitive, and as playful as they are professional. And now that we've tweaked a few moments in the score, and the trickier rhythms are sounding like second nature to them, it's really coming alive. Roland has nurtured an incredible ensemble sound and I'm sure he will be missed when he leaves, as much for his musicality as for his wide-ranging, cross-disciplinary creative visions.

And today, also, Deborah has been in attendance at rehearsal, absorbed in observing the process of pulling the piece apart, bar by bar, as the Company comes to grips with the details and intentions of the piece. Despite the stop-start nature of any such rehearsal, at the end she told me she had teared up the first time she heard the song all the way through, which for me is about as good a response as I could hope for. And now I can't wait to hear it amongst the rest of the pieces that make up this extraordinary project.