Resurrecting the works of Meta Overman

Pianist Jeanell Carrigan has been engaged in a project to get the little known and mostly unperformed works of Dutch-born Australian composer Meta Overman published and recorded. For Carrigan's earlier recordings of Australian piano works, see Narratives and Detours, A Little Variation (Vox Australis) and a full list of MP3s and CDs available through the AMC Shop.

Dutch-born Meta Overman is one of many composers who have been almost forgotten by history. During her lifetime, Overman's compositions were performed and recorded, but since her death all of her works have remained in archival storage in libraries. Some composers may be forgotten because their works don't stand the test of time, they are badly composed, or only suit the style of the time in which they were written. I don't feel Overman falls into this category. 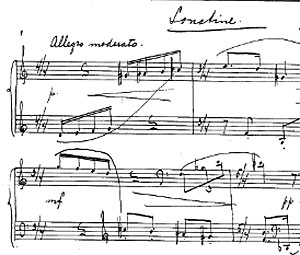 A sample of Overman's handwriting (Sonatina, 1940).

She was born in Rotterdam (1907) into a particularly musical family. Her own musical ability was obvious from an early age when she would place picture books on the piano and attempt to play what she could see. This ability to transform pictures into musical concepts and sounds is evident in all her compositions.

She began piano lessons very early, firstly with her mother who was a professional teacher, and later with Johann Kievid, who after the Second World War became a Professor at the Berlin Hochschule for Music. Her composition teachers included Eduard Flipse and, from 1937, Willem Pipjer, perhaps the foremost Dutch teacher of composition of the 20th century.

Overman survived two world wars in Holland, the Nazi occupation and almost total destruction of Rotterdam in 1940. In 1951, due to the shortage of housing after the war, she migrated to Australia to settle with relatives of her husband at that time, pianist Frank Russcher, with whom she had formed a successful piano duo. From 1951 to 1955 Overman lived in either Perth or Albany, WA, and wrote a number of pieces for choir, orchestra, ballet and piano. Her most important composition at that time was the opera Psyche which was written for the Festival of Perth and performed in the Sunken Garden at the University of Western Australia in 1955.

In 1957 Overman moved to Melbourne with her second husband Robert Hyner, who for some time was part-time curator of the Percy Grainger Museum. In the time that Hyner and Overman worked together at the Museum they transformed it into more of a music centre with regular concerts and an electronic music studio.

During her time in Melbourne, Overman was connected to other Melbourne-based composers, including Margaret Sutherland, Dorian le Gallienne and Keith Humble, and had a number of her works performed by the ABC and other organisations: Suite of Old Dance Forms (1959) for orchestra, The Image of the Cross (1953 - performed in 1958 by the Oriana Madrigal Choir), Sonata for Viola and Piano (performed by John Glickman, viola, and the composer), Berceuse (1945) for two pianos (recorded and performed by Max Olding and Pamela Page) and Sonata II (1953) for piano, recorded for a vinyl disc by Muriel Cohen.

There was a brief period of nine years between 1969 and 1978 where Overman returned to Holland due to ill health but in 1978 she resettled in Perth where she remained until her death in October, 1993. Although Overman never took out Australian citizenship, her close connection to Australia and the importance of the works written while living here put her into that category of Australian composers similar to George Dreyfus and Felix Werder.

Overman's mature musical composing life spans from 1939 to 1988. Her works cover many genres. There are seventeen works, or sets of works, for piano solo, five for orchestra, six sets of songs, five choral works, eleven operas including one three act opera, four ballets and twenty-four chamber works, some of which are for two pianos. She never really worked as a teacher of piano, so missing in her oeuvre are the teaching pieces, books of studies and piano albums that occupied the time of many composers who wrote for their students.

The music by other composers writing and living at the same time as Overman has survived more prominently because of several reasons. They were male (unfortunately this counted for something in 1955), they were teachers or examiners whose works were therefore performed by students, or they lived in capital cities where the scores were more accessible. All of her manuscripts, the beautifully hand-written - and in some cases illustrated - scores, many letters, reviews of concerts, newspaper articles, programs and other personal memorabilia are stored in the University of Western Australia music library.

There are seventeen piano works, or sets of works by Overman:

It can be observed that, in her piano music, Overman was driven by harmonic interests, rather than melodic, and often incorporated rhythmical motives as the governing structural element. Her works are structured carefully, and each work relies on a definite motive, established at the beginning of the work, which underpins that particular composition in its entirety. Her use of harmony, while not necessarily based on diatonic tonality, is very chromatic and does not rely heavily on the use of dissonance and consequent consonance.

She was not afraid to use seconds and sevenths in order to create tension in a work. In pieces with descriptive titles she was enormously successful in creating exactly the correct atmosphere to portray the desired pictorial image of the title. This of course emphasises the fact that her own mental image of what she was trying to create musically was always very strong.

With the exception of the second piano Sonata (1953) none of her piano works have ever been performed. Several libraries (including the Australian Music Centre) have copies of badly photocopied facsimile versions - some practically illegible. As such, these works never leave the shelves! My project is to publish all of her piano music in printed format with a recording of each work. They are to be published by Wirripang, Australia, and will be launched in September 2014, at the University of Western Australia. Subsequent launches will also occur in Sydney, (the scores will be on display in the 'mirrored room' in the Sydney Conservatorium of Music library) and at a conference in Wellington, New Zealand in August.

The scores have all been typeset with the assistance of a generous grant from the Sydney Conservatorium of Music (University of Sydney) by composition student, Ciaran Frame, and each work has been recorded in the Verbrugghen Hall at the Sydney Conservatorium. The compositions will be edited and the publications will include biographical, editorial and performance notes as well as individual compact disc recordings.

The difficulty in preparing the scores has been mostly deciphering aspects of legibility. The scores could not be prepared for recording until typeset as some of the hand writing was too difficult to read. There were some scores which had never been entrusted to libraries and were still in the possession of Overman's second husband in Perth. These scores - of an unbelievable historical value - are original scores where no other copy exists. It is a relief to know that they soon will be in a format accessible to everyone.

It would be wonderful to think that the publication of these scores might generate more interest in a composer who had developed a strong voice of her own, as well as assimilating into her musical language facets of the style of the time. I hope that the piano works of Meta Overman will have a deserved resurrection.

© Australian Music Centre (2014) — Permission must be obtained from the AMC if you wish to reproduce this article either online or in print.

Pianist Jeanell Carrigan has performed as a soloist, chamber musician and accompanist in Germany, Italy, Austria, Switzerland and throughout Australia. She has completed a Doctor of Creative Arts (University of Wollongong), in the area of Australian post-1970 solo piano repertoire and released 14 solo CDs of Australian piano music. Her publications include an annotated guide to Australian solo piano music and several teaching kits related to the performance of Australian piano music. As a teacher she has experience at all levels - primary, secondary and tertiary - and is constantly in demand as an examiner and adjudicator. Carrigan is presently a Senior Lecturer in Ensemble Studies at the Sydney Conservatorium of Music.