Meta Overman's opera Psyche would still be hiding in the archival boxes of the University of Western Australia's Music Library, had it not been for the determined work, over several years, by the Australian pianist Jeanell Carrigan to research, revive and promote Overman's music. Psyche will be performed on 16-17 August at the Sydney Conservatorium of Music.

'Who cares that in a small town in Western Australia lives a new Australian who is also one of the world's finest women composers?'

James Penberthy wrote these words about composer Meta Overman in an article in the Sunday Times, Perth, in 1955. Overman had only just established herself in Australia. 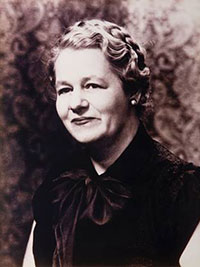 Born in Rotterdam in 1907, she had studied composition with the Dutch master Willem Pijper. After her arrival in Australia she was considered a contemporary of Margaret Sutherland, Robert Hughes, Keith Humble and Dorian le Gallienne. Her oeuvre includes works from all genres, including seventeen works or sets of works for piano solo, five for orchestra, six sets of songs, five choral works, eleven operas including one three-act opera, four ballets and twenty-four chamber works, some of which are for two pianos. Until recently, most of this amazing output was being stored in Perth in the University of Western Australia music library in archival boxes, and as such not much had been performed since the composer's death in 1993.

To a researcher, discovering a composer such as Meta Overman was like finding a treasure. The quality of her compositions and the fact that most of her works existed as manuscripts offered possibilities for world premiere recordings, publications and articles using original research.

The music of Meta Overman is innovative, individual, sometimes humorous, expressing amazing creativity and powered by strong visual imagery. The desire to express imagery in sound was obvious from an early age when the young Meta would place picture books on the piano and attempt to play what she could see. Her musical language transforms images into musical concepts and sounds and this intention is evident in all her compositions.

Overman survived two world wars while living in Holland. In World War II Rotterdam, the city where she was studying and working at the Conservatorium, was completely flattened and then occupied by an aggressive German army. The resilience that was necessary to carry out everyday tasks, far less create musical works, teach composition and prepare for performances is present in her musical language and stylistic convictions.

Overman immigrated to Australia in 1951 with her then husband, pianist Frank Russcher, and their young son Marius, because of the severe housing shortage suffered by the Dutch - a common European problem after the war. Russcher had family connections in Perth, and the family settled into the hot summer of Western Australia with misgivings and discomfort. To compensate for her homesickness Overman composed. She wrote her three-act opera Psyche between 1951 and 1953, its conception and construction overshadowing other musical activities during that time.

The original Festival of Perth was conceived as a summer festival held in conjunction with the University of Western Australia. The idea to hold such an event in Perth germinated with Professor Fred Alexander, the Director of Adult Education at the University. His dream was to hold a festival to attract international artists to Perth despite the geographical isolation of the city.

Overman began to write Psyche for a premiere at the very first Festival in 1953. The opera was to be performed in the Sunken Garden, which is a beautifully picturesque garden situated within the grounds of the University campus, and Overman tailored the action of the opera particularly to suit the aspects of this garden. Professor Alexander favoured the work as it was 'a most unusual and interesting experiment in art form and quite the thing the board should sponsor'1. The work was completed in February 1953.

Unfortunately the intended premiere season was cancelled: a producer could not be found, and performing a work in an outdoor setting in inclement weather was considered too difficult. There had also been critical comments about the opera's libretto. The work was finally scheduled for ten performances between 1 and 10 March 1955 as part of the Festival of Perth, in the Sunken Garden, the intended venue of work. Frank Russcher took on the role as producer, musical director and also played the very difficult piano part which accompanied the singers and dancers. The audience response to the opera was excellent but the performances did not attract a big crowd and the box office takings were very poor.

Reviews were mixed. 'She is an artist both gifted and serious minded … but the work is not without flaws and miscalculations', wrote one reviewer2. A humorous event occurred when a critic wrote that the musical interlude was far too long and convoluted - what actually happened was that one of the dancers missed his cue after the interlude and the whole passage had to be played again so that he could enter. The critic later apologised.

The work had piano accompaniment for the main action, and Overman regretted that the work was never orchestrated - or performed - again. The failure of Psyche also brought to a head the problems in the marriage, and Overman and Russcher decided to separate.

Despite the financial and personal losses associated with Psyche, Overman considered it her masterpiece. To this day there is a plaque on the wall at the side of the Sunken Garden to her memory. The composer's ashes were also scattered there.

The story of Psyche is based on the fairy tale of Psyche by Dutch novelist and poet, Louis Couperus, and the concept emphasises the very essence of Overman and her penchant for the visual and pictorial when related to music. The opera was highly innovative in that it did not follow the usual opera format with major singing roles and a large chorus. The characters in the opera were not all singers - in addition to two singing roles, there were dancers, two actors with speaking roles, and instrumentalists (flute and harp) using an instrumental type and 'leitmotifs' to create the personality of the character. The title role of Psyche was performed by a dancer; the role of Eros was sung by a tenor; The King (father of Psyche) had a speaking role; and the role of Astra - sister of Psyche - was played by a harpist.

As part of my ongoing project to record, publish and describe all the compositions of Meta Overman, I decided to realise one of her major ambitions: to see Psyche orchestrated and restaged. Meta Overman was a highly regarded composer in her lifetime and Psyche represents not only the work she considered her masterpiece but a catalyst to all subsequent compositions. Until now, Psyche had never been revisited and only existed in a facsimile piano score. The project included the orchestration, publication, performance and filming of the work, hopefully creating not only a major event for 2019 but a platform on which other future performances can be built.

The work has been orchestrated for a chamber orchestra consisting of a string quintet of single players, flute, oboe, bassoon and piano. There is also a solo flute player who takes on the character role of the Satyr and creates the music behind an actual dancer on stage. These instruments enhance the sound of the piano, filling out the timbres that, perhaps, Overman herself would have used. The harp is still performed by one of the character roles and that part is unchanged.

In the original production accompanied by solo piano, a great deal of the writing was idiosyncratically for the piano. Most of the pianistic figures have been left as Overman envisaged. However, melodic lines suggested certain colours to me, and, where appropriate, these are now played by the various instruments of the chamber orchestra.

Overman used leitmotifs - rhythmical and motivic elements to create the aural images of certain characters. I have retained the same instrumentation each time the different characters appear with the aim of retaining the individuality that Overman herself devised.

In our production in August 2019, to be staged at the Sydney Conservatorium of Music, the main focus will be on the role of Psyche, to be performed by the brilliant dancer, Marlo Benjamin. Psyche carries the production visually while the music of Meta Overman carries the production aurally. The role of the evil sister Emeralda will be performed by Narelle Yeo, who will also direct the production, with the assistance of Olivia Ansell. Bradley Cooper (tenor) will take the role of Eros, the prince and husband of Psyche. Julie Kim will be Astra, the harp-playing sister; Andrew Knight, the King, father of Psyche; Lachlan Massey the Hermit; and the counterpart to Psyche will be Zachary Lopez who will dance not only the role of the seducing Satyr but also the role of the wise Chimera. Roger Benedict will conduct members of the Sydney Symphony Fellowship program with the inclusion of Michelle Wang, flute; Jeanell Carrigan, piano; and James Kortum, solo flute.

Meta Overman's Psyche will be performed on Saturday afternoon 17 August at the Sydney Conservatorium of Music, with an open dress rehearsal on the evening of Friday 16 August.

© Australian Music Centre (2019) — Permission must be obtained from the AMC if you wish to reproduce this article either online or in print.