Image: Patrick Thomas at the Art Music Awards in 2011

Orchestral conductor, flautist and writer, Patrick Thomas MBE AM has died at the age of 85. Thomas had a distinguished career in music spanning over 60 years and was known as a fierce advocate for new music and Australian talent.

Originally from Brisbane, Thomas made some of his first appearances as a flautist with the Queensland Symphony Orchestra and eventually went on to become the orchestra's chief conductor in 1973. In special Modern Music Forum concerts, organised in collaboration with the ABC's then Queensland Music Manager, Tony Gould, Thomas conducted many major new works of Australian orchestral repertoire by composers such as Peter Sculthorpe, Don Banks, James Penberthy and Eric Gross, as well as local composers such as Colin Brumby and Philip Bracanin. 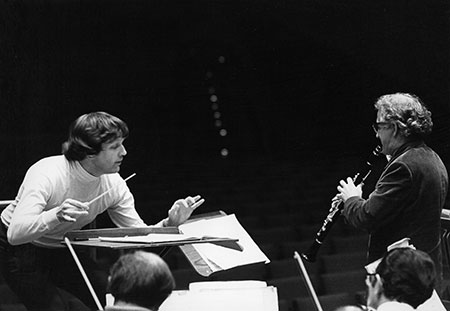 He was also increasingly in demand to conduct other Australian orchestras, and, in 1978, he moved to Sydney to become the conductor in residence of the ABC, a position he held until 1986. In this role he promoted the music of many new Australian composers, including Graeme Koehne, Gerard Brophy, Andrew Schultz, Michael Smetanin and Brenton Broadstock.

Thomas was appointed a Member of the Most Excellent Order of the British Empire for his service to music in 1978, and received the Sir Bernard Heinze Memorial Award in 1990. In 1998 he became the first Australian conductor to become an honorary life member of the Fellowship of Australian Composers. In 2010, Thomas published a book of autobiography and poetry Upbeats and downbeats: a conductor's life (2010).

In 2011, Patrick Thomas shared the Award for Distinguished Services to Australian Music, presented as part of the annual Art Music Awards by the AMC and APRA AMCOS, with conductor John Hopkins.

In his presentation speech, Martin Buzacott talked about the importance of Thomas's work for Australian music: '...he didn't just give first performances by contemporary composers, although he certainly gave an unprecedented number of those. He championed the music of ALL Australian composers, living and dead, and he gave as many second and third and fourth performances - keeping the new music alive and circulating - as he did premieres.'

Thomas was named a member of the Order of Australia in 2014. He died earlier this week at the age of 85.

© Australian Music Centre (2017) — Permission must be obtained from the AMC if you wish to reproduce this article either online or in print.